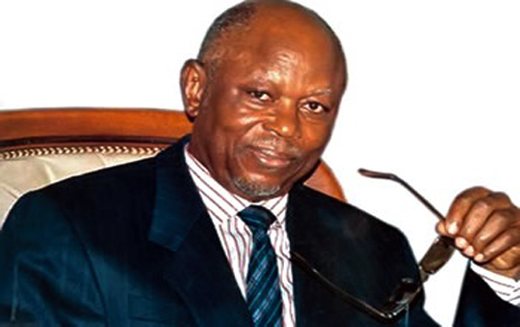 The National Chairman of the All Progressives Congress (APC), Chief John Odigie-Oyegun, on Thursday in Abuja met members of the party from Kogi East Senatorial District as part of reconciliatory efforts.
A statement signed by Edegbe Odemwingie, Assistant Director of Publicity of the party, said that at the meeting Odigie-Oyegun explained the rationale for picking Yahaya Bello to replace late Abubakar Audu as governorship candidate.
According to the statement, the chairman said that settling for Bello was the best option to avoid legal pitfalls.
It quoted him as saying ”I don’t think that it is right to think that the national leadership of the APC took a decision and thereafter turned its back; we will not do that.
”We guarantee that the political family that has lost its leader will participate effectively in the unfolding events in the next few weeks.
“I expect and hope that consultations at various levels are going on so that if there is a gap, we, at the National Headquarters, know what step to take to correct the situation before it becomes a problem.”
He said that the party did what it had to do under the prevailing circumstance to pick Bello.
“We took the decision in a circumstance that someone was bound to get offended and we were very conscious of the very peculiar circumstance of a group that was on the doorstep of victory.
”So in the circumstance, we did what we interpreted legally as the best way out of the jam we were in, always having our eyes on the Peoples Democratic Party (PDP) and what they may likely bring up in court.
”INEC asked us to replace the late Audu, and which one can we defend better if they go to court was the issue on our mind. That was the basis of our decision.
‘’But of course, it created understandable anguish.
“So what we are trying to do is to say we know you are badly bruised, we hope tempers are cooling down.
‘’We hope we can now talk about the next steps that will restore some semblance of normalcy all over Kogi state,” he said.
Odigie-Oyegun said that politics was not monarchy hence the issue of father succeeding son did not arise.
“In politics, everybody works for his own inheritance. It is not passed on from father to child; of course, the father can help the child, no question about that.
”The child can benefit from the father’s influence, personality and the rest, but he has to earn it. Politics is not an inheritance.
“All we want is some semblance of normalcy, reconciliation. So, if meeting with the core group before the larger group, will help that, we are up for it.
”We must act fast because the process of putting things together post-January is already underway. We want to be able to stand together as a party as guarantors of the Abubakar Audu political family.
”Time is not in our side,” he stated.
Responding, Chairman of APC in Kogi, Haddy Amefuo, said the leaders from the zone had decided to stand by the decision of the party’s leadership and close ranks.