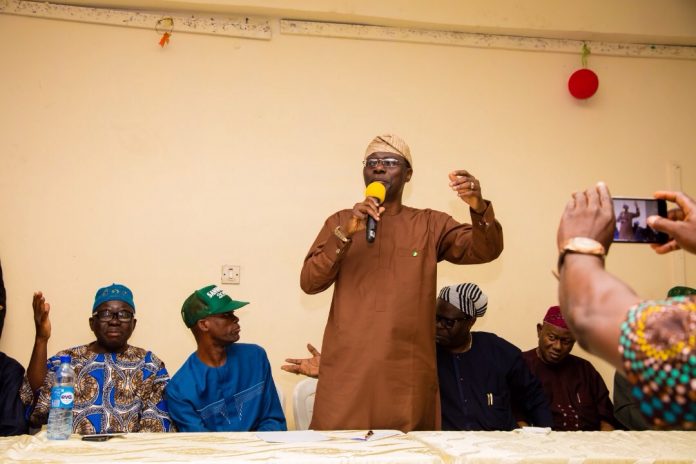 The rising profile of Babajide Sanwo-Olu, a governorship aspirant on the platform of the All Progressives Congress, APC, sponsored by Asiwaju Bola Ahmed Tinubu, to succeed the incumbent governor in 2019, has continued to sink the political profile of Governor Akinwumi Ambode as preparations for the Saturday, September 29, 2018 APC governorship primary election intensify.

Ambode suffered a huge set back when 377 APC Ward Chairman in Lagos under the aegis of Conference of Ward Chairmen unanimously abandoned the incumbent governor and endorsed Babajide Sanwo-Olu as the governorship candidate to support in the Saturday’s primary election.

The group is made of ward chairmen from all the 20 Local Government Areas and 37 Local Council Development Authorities in Lagos State.

National Daily learnt that the endorsement took place at Martino’s Hall in Ikeja during a meeting between the governorship aspirant, Babajide Sanwo-olu, some leaders of the party and the grassroots mobilizers where members of the Conference had a one on one interaction with the aspirant.

The Director General of the Babajide Sanwo-Olu Campaign Organization (BOSCO), Mr. Tayo Ayinde, opened the meeting by extolling the good virtues of the aspirant, reminding the chairmen of some great strides that Sanwo-Olu has made while serving in different capacities as Special Adviser and Commissioner at various times. Ayinde assured everyone present that Sanwo-Olu is a party and will not abandon the party and its members when he eventually becomes the governor.

He enjoined the Conference members to mobilize all party men and women in their individual wards to come out in large numbers and vote for Babajide Sanwo-Olu as the candidate of the All Progressives Congress on Saturday.

APC leader, Cardinal James Odumbaku told members of the Conference not to despair, emphasizing that the Babjide Sanwo-Olu government will be a listening and an inclusive one especially for members of the party whose input will be paramount and will form part of decision making process.

Cardinal Odumbaku prayed for a successful run ahead of next Saturday’s primary elections in the State. He also prayed for all party members and the entire people of Lagos State.

The governorship aspirant, Babajide Sanwo-Olu thanked all the entire Conference of Ward Chairmen in the State for the confidence reposed in him and promised not to disappoint them when he gets to power.

Sanwo-Olu, who spoke in Yoruba throughout the event, went down memory lane by informing the chairmen of his role in the cabinet of former Governors Asiwaju Bola Tinubu and Mr. Babtunde Raji Fashola as Special Adviser, Commissioner for Budget and Planning, Commissioner for Establishment, Training and Pensions before being reappointed as Commissioner for Commerce and Industry.

He reminded the grassroots politicians of his role as fund raiser for the party in most of the elections held in the past.

Speaking on loyalty, Sanwo-Olu told the chairmen emphatically that he has remained a loyal member of the party between 2002 till date.

Speaking on behalf of all ward chairmen in Lagos State, Mr. Shola Oshobajo assured Mr. Sanwo-Olu of his members’ support before, during and after the primary elections, which is scheduled to hold on Saturday 29th, 2018.

Amidst cheers and applause, punctuated by music, Mr. Sanwo-Olu was presented to the Conference of Ward Chairmen and they rose to endorse him in unison.