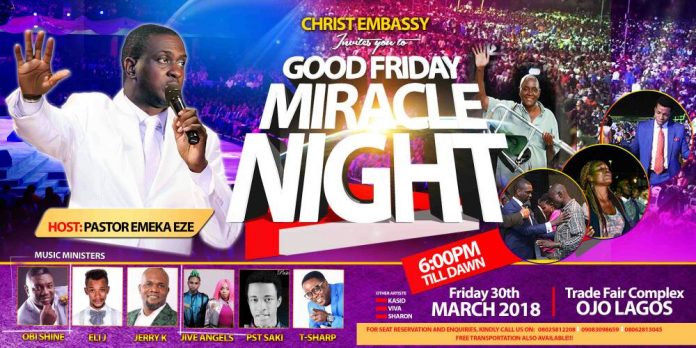 A million-man Good Friday Miracle Crusade (GFMC) is billed to rock the city of Lagos March 30, courtesy of the Believers’ LoveWorld , Zone 2, Lagos.

The soul-winning outreach, the organisers say, is inspired by the Holy Spirit, and will be packed with healing, change of destinies, miracles, signs and wonders.

“Our Man of God, Pastor Chris Oyakhilome, has blessed the program,’  Chairman of the Organising Committee Pastor Dipo Isaacs told The National Daily.

“He has given us the Word to go forth to impact the city of Lagos and, indeed, the whole world as the meeting will be streamed to the nations of the world.”

According to him, the program will entrench the message of the BLW in the hearts of men and women in the city of Lagos.

“It’s an epoch making program that will touch every life and change the city of Lagos.”

The organisers say members of the zone have started inviting people to the programme, having known what awaits the participants.

“As always, there shall be Healing, Salvation and Miracles for all in attendance as the power of God will be demonstrated beyond human comprehension,” said Pastor Dipo as he is fondly called.

The GFMC starts at 6 pm, and will end Saturday early morning.

“Arrangements have been concluded for free transportation for people to attend the crusade,” said Pastor Isaacs.

According to him, “this is not just a programme for one night but a programme whose impact will be the talk of the nation for years to come.”

“Buses will be available from Ikeja, CMS, Obalende, Mike 2, Ojuelegba, Oshodi, Ojota, Orile, Yaba and other major bus terminals in the state.:

LMAM stars like T-Sharp, Obi Shine,  Jerry K,  Eli-J, Pastor Sakky, Jive Angels and many Zone 2 all Star Artistes will be there to minister in songs.

Adequate security has been put in place to ensure safety as well as free flow of traffic in and around the venue of the programme.

Already, the City is adorned with several billboards and large publicity banners with imposing branding of BRT and LAG buses across Lagos metropolis. 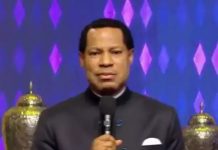