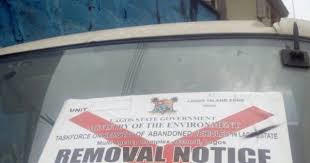 The Lagos State Government on Monday announced plans to commence removal of all abandoned vehicles on roads to complement emergency recovery efforts and prevent mishaps on streets and major highways in the State.

The Commissioner for Special Duties and Intergovernmental Relations, Mr. Oluseye Oladejo, at the Ministerial Press Briefing to commemorate the third year anniversary of Governor Akinwunmi Ambode administration held at the BagaudaKaltho Press Centre, Alausa, explained that the decision is aimed at further addressing traffic decongestion and averting security challenges associated with abandoned vehicles.

Oladejo said the Governor has already approved the creation of Vehicle Recovery Unit to solely see to the removal of abandoned and accident vehicles on the roads which would be under the Ministry of Special Duties, adding that plans were being firmed up for the take-off of the unit soon.

“The Ministry late in 2017 was given the mandate to set up a unit for vehicle towing and recovery services to remove abandoned and accidental vehicles from our roads.

“The Ministry of Special Duties and Inter-Governmental Relations has gotten approval from the Governor to set up a Towing and Recovery Unit in the Ministry to complement the emergency rescue efforts of the State.

“This speaks largely to efforts in terms of prevention to mop up abandoned vehicles in all nooks and crannies in the State and also to make sure that broken down vehicles are promptly removed to prevent mishaps on the highways. For the smooth take off of the Unit, the Governor also directed that equipment and towing trucks of various capacities be procured to be able to remove vehicles of whatever make and size,” the commissioner declared

The Commissioner said as part of efforts to improve the functionality of Fire Service Department and to efficiently manage disasters, the Governor has also approved the recruitment of additional 150 fire fighters who would join the newly inducted 100, while 70 ad-hoc staff of the Lagos State Emergency Management Agency (LASEMA) had already been absorbed into the State civil service.

Oladejo further said that in the last one year, two new fire stations were established in Bolade-Oshodi and Abesan, while approval had been granted for creation of four stations to be located in Safety Arena, Eredo-Epe, Olorunda-Badagry and ijegun-Satelite Town.

In addition, Oladejo said, the fire stations in Alausa, Ikeja, Isolo, Agegeilupeju,Badagry-Suru, Ikotun and Agege were upgraded to further guarantee prompt response to fire and other distress calls, adding that all the stations totalling 16 were not only fully operational, but strategically situated to provide swift and effective services to people across the State.

Giving a breakdown of fire incidents in the last one year in the State, Oladejo said that within the period under review, the Department of State Fire Service salvaged property worth N76.9billion from destruction, while it received a total of 1,282 emergency calls, with 980 fire calls, 202 rescue calls and 83 false calls, adding that despite the sizeable number of incidents recorded, the State Government was able to respond promptly to the emergencies thereby saving lots of lives and properties.

“Within the period under review, the State Government rehabilitated and upgraded 225 old Fire Hydrants that were initially below ground level in Lagos Metropolis and Installed 50 new additional ones to link the Mini/Micro Water Works in the State. The hydrants have been providing easy access to copious Water supply for Firemen during Fire fighting and Rescue Operations.

On efforts by LASEMA to scale up emergency response, Oladejo said the agency which had just one Response Unit in Alausabefore the advent of the present Administration, now has three centres inCappaOshodi, Lekki and Onipanu, with further plans to establish additional three upgraded Dispatch Centres inIjanikinclose to Badagry, Temu Junction, Epeand LASPOTECH inIkorodu, as well as a fourth conventional LRU at Costain to cover Apapa Axis and its environs.

“The new Unit Situated at Igbobi/Fadeyi was centrally located to facilitate easy access to most Mainland areas of the State. This would complement equipment already acquired to boost the sea, air and land capabilities of our emergency responders. Government has established Relief / Resettlement Camps in Agbowa and Igando to cater for disaster-related Internally Displaced Persons (IDPs) across the State. Work has also commenced on the Construction of a third Relief / Rehabilitation Camp in Lekki, which was approved by His Excellency, Mr. Akinwunmi Ambode last year,” Oladejo said.

He added that in furtherance to the need to provide proper extrication equipment for timely rescue of trapped victims in any form of life-threatening emergencies, LASEMA in February, 2018, procured Light Rescue Equipment, which included Hydraulic rescue equipment, Power Unit attached with Spreader, Rescue Ram, Cutters Combi Tools, and Concrete Cutters, 14 BMW Power Bikes have also been launched which are usually deployed at making on-spot reconnaissance assessments of incidents with a view to unambiguously determine the type and quantities of equipment to be deployed for a given incident, as well as serve to improve monitoring and surveillance.

“LASEMA, in the last one year had responded to numerous fire incidents, road accidents, flooding, illegal parked trucks, gas explosion/emission amongst other emergencies in record time, thereby saving lots of lives and properties worth millions of naira,” Oladejo said.