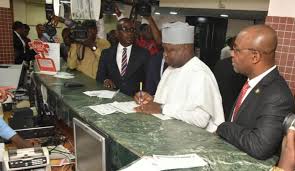 There have been reports of arbitrary charges by the Lagos State Government as copies of the Land Use notices went viral on social media.
In one of the notices, a residential house in Omole Estate phase 1 was valued at ₦589.3 million which makes the payable Land Use Charge at over ₦4 million.
A resident who lamented that arbitrary charge by the Lagos State government wonder how the government arrived at such inflated charges.
According to the government, residential houses will be charged 0.076% multiply by the relief vaulue-40% off the property value, while houses for commercial use will pay 0.76% of the relief value and the owner-occupied plus commercial buildings will pay 0.256% of the relief value.
The vitriol against this law is pervasive as officials of the State Government hop from one radio station to another in a bid to quell the backlash. From what National Daily has come to understand, the resentment shown against this law is mostly attributed to the high increase in demand notices received by property owners in Lagos.
Lagos State, on the other hand, is bent on allowing this law to succeed and is hoping that some of the outrage being displayed by property owners drown out as more issues engulf the news cycle as we have seen many times in the past.
The State Governor has however assured that a positive position to ameliorate issues raised by stakeholders on the new land use charge will be out by next week noting that the increment was all in a bid to protect the future and create permanent prosperity.
Meanwhile, members of the Ikeja branch of the Nigerian Bar Association joined by other civil society groups staged a protest over the reviewed land use charge on Tuesday, 13 of February.
The protesters led by their chairman, Adesina Ogunlana marched to the Governor’s Office in Alausa, Ikeja, the state capital, carrying a banner and various placards with inscriptions lamenting over the law.