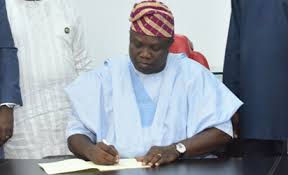 The Ikeja branch of the Nigerian Bar Association (NBA) on Wednesday counseled residents in Lagos not to be in a hurry to pay the reduced Land Use Charge announced by the Lagos State Government.

Chairman of the Ikeja NBA, Adesina Ogunlana, in a media interaction  in Ikeja,  described the reduction as a sham, a farce and a fraud, adding that the rates prescribed now subjected to reduction is based on a fraudulently extractive foundation.

Lagos State Government at ta State Executive Council chaired by Governor Akinwunmi Ambode had reduced the Land Use Charge by 50% in response to p[opulist protest of the initial increase.

The state government had jacked up the charges payable by 400 per cent as enabled by the Land Use Charge Law of 2018. NBA Ikeja along other civil society groups had protested the increase, demanding that the state should revert to the old rates.

Ogunlana speaking on: “Land Use Charge: Matters Arising: GATT Must Go”, described the introduction of the land use charge as undemocratic, illegal, excessively oppressive, arbitrary and parochial.

expressing discontentment that the branch and other protesters were treated shabbily and poorly by the state government during the last protest tagged, ‘Walk The Walk’, he maintained that that sudden reduction of the charge by the state

He said Lagosians are not against taxation neither are they against increase in taxation but that the conditions for the acceptance of such increase must be transparent, gradual and reasonable.

The NBA branch, therefore, gave the Lagos House of Assembly a seven-day ultimatum to publish in the papers the proposed draft of the Reviewed Land Use Charge Law for interested residents and stakeholders to study and for adequate participation in public hearing that will precede any amendment.

According to Ogunlana, failure on the part of the parliament to do this within seven days will lead to another mass streets protest.

THE Chairman declared: “In fact, we NBA Ikeja branch completely reject the reduction for being a sham; a calculated ploy to hoodwink the good people of Lagos State and to present the facade that here, Ambode government is a listening and sensitive government.

“The reduction is a sham, a farce and a fraud because, the rates prescribed now subjected to reduction is based on a fraudulently extractive foundation. There was no proper evaluation of properties.

“Property owners were never aware or involve in any evaluation of their properties. So, what we had from government is ghost evaluation.

“So, when the government says it is slashing cost, they are only deceiving people: the amounts prescribed are mere fantasies of their imagination.

“We reiterate our rejection of the Land Use Charge, high litigation cost in the court, borehole levies, car registration and all such other oppressive, illegal, extortionate charge of Lagos State.
“The Land Use Charge Law 2018 as known now must be repealed.

“Lagosians, from our own understanding and interactions are not against taxation in Lagos State and are not even against increase in taxation.

“However, the conditions for their acceptance of taxes are: transparent, gradual, reasonable and legally utilized. No Lagosian should be in any hurry to pay the Land Use Charge.

“No payment should be made until the government listens and bow to the people’s will.

“Let the parliament within seven days from now publish in the papers the proposed draft of the Reviewed Land Use Charge Law of Lagos State for interested residents and stakeholders to study for adequate participation in public hearing that will precede any amendment and which amendment should be delayed until May 2018.

“Where the government of Lagos neglects, fails and refuses to positively consider these conditions, the NBA Ikeja will organize and embark on another protest action on Friday, March 29, 2018, to make the government truly answerable to the electorate.”