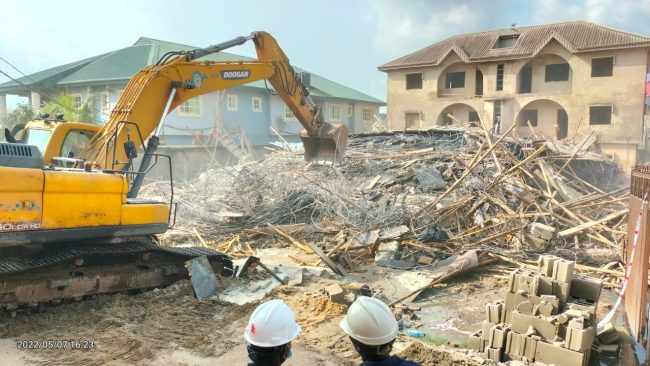 A statement by Mr Mukaila Sanusi, spokesman for the Lagos State Ministry of Physical Planning and Urban Development, on Sunday, said the Lagos State Building Control Agency (LASBCA) carried out the demolition.

The News Agency of Nigeria reports that LASBCA is one of the agencies being supervised by the Ministry of Physical Planning and Urban Development.

According to Sanusi, the commissioner, Ministry of Physical Planning and Urban Development, Dr Idris Salako said, “detailed investigation into the remote and immediate causes of the collapse had been ordered.”

Salako said preliminary report of the collapse suggested that a section of the building disintegrated due to excess weight.

The commissioner explained that no lives were lost despite the fact that the building was in use, adding that the site had been cordoned off to guarantee safety.

Salako said to avert danger, another building under construction on the same street “was completely pulled down by LASBCA for poor construction and use of inferior materials.”

He said all hands must be on deck to tackle the menace of building collapse as the recurring events, especially during the rainy season were worrisome and required holistic measures.

He stated that the state government was adopting several measures including technology to reform the regulatory environment.

The commissioner said the measures included application of stage-detection technology, automation of the activities of the parent ministry and its agencies and the creation of additional district offices.

He noted that additional district offices would ensure more presence of regulatory officials in remote parts of the states to be able to detect illegal and distressed buildings.

Share this on WhatsApp
Related Topics:demolishesLASGOkotapartially collapsedsubstandard buildings
Up Next