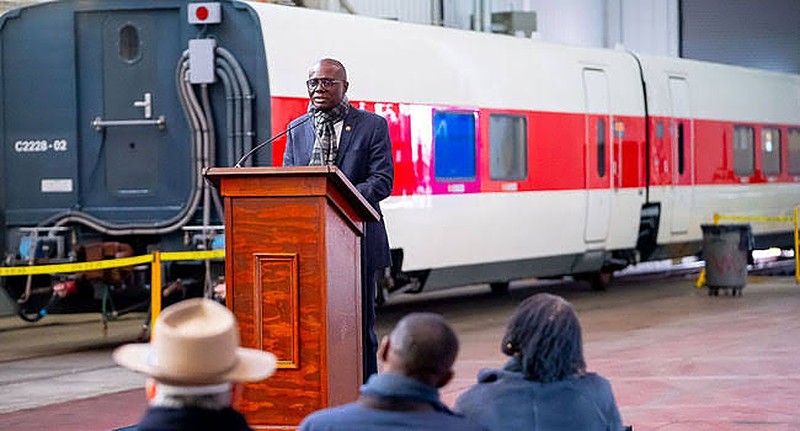 Akinajo said this while speaking with the News Agency of Nigeria in Lagos on Thursday.

She said that the Lagos State Government was conscious of the Greenhouse Gas effect on the environment.

“The Lagos State Government is being futuristic and thinking about cutting down drastically the effect of emissions in the environment and on the people.

“The state government is also very conscious of the Greenhouse Gas effect on the environment, hence the electric train,” Akinajo said.

She explained that passenger operations commencement would be improved as commuters would be given choices by cutting down travel time, improving businesses and enhancing the value of property along the corridor.

Akinajo said that traffic congestion, which had been the hallmark of the Blue Line corridor of Lagos Badagry Expressway, would be reduced drastically while calling on vehicle owners to drop their vehicles and use the rail system to ease their commute to Lagos Island.

The LAMATA boss said that the Blue Line was one of the six rail lines articulated in the Lagos State Strategic Transport Master Plan (STMP).

She added that it was a brainchild of one time governor of the state and the presidential candidate of the All Progressives Congress, Asiwaju Bola Ahmed Tinubu.

“His successor, the current Minister of Works and Housing, Mr Babatunde Fashola began the implementation of the Blue Line as governor of Lagos State in 2010.

“For eight years, the state government under his watch, funded the construction of the rail project from internally generated revenue.

“This is unprecedented in the history of rail construction anywhere in the world. The implementation continued howbeit slowly until Governor Babajide Sanwo-Olu mounted the saddle.

” He sees transportation as one of the giant components for any economy to thrive, hence it is the first pillar of the THEMES development agenda for Lagos.

“This speaks to the importance this administration places on Traffic Management and Transportation.

“To bring the Blue Line, a 27-kilometre rail route from Marina to Okokomaiko, the governor had to use a window of funding by the Central Bank of Nigeria.

” The CBN window had pooled three banks – Access Bank Plc, Fidelity Bank Plc and and Sterling Bank Plc – together to fund the completion of infrastructure for the first phase, which is about 13-kilometre of the 27-kilometre stretch,”she said.

Akinajo stated that the construction of the Blue line had been most the challenging projects the state government had ever embarked upon, giving the many issues they had to overcome.

She said that before the authority got to this point, they had disturbances and delays in the relocation of submarine cables, submarine natural gas pipelines, and removal of underwater ship wreckages.

The LAMATA boss said that they also experienced complex of submarine geological conditions which made construction in the lagoon extremely difficult.

Akinajo said that barges had collided with the trestle in several time, the outbreak of Covid19 epidemic, and the long transportation cycle of imported equipment and materials had contributed to delays in the prompt completion of the rail project.

According to her, the test running of the Blue line train will start after the commissioning by President Muhammadu Buhari in two weeks.

She said that there was need to test run the train from the completed 13 Kilometres from Mile 2 to Marina.

Akinajo explained that the Blue line was 27 kilometres from Okokomiko to Maritime which would be built in phases, adding that the test running of the completed part was to be certain that the train was ready for passenger operations.

She said that during the test running, LAMATA would be able to understand the operation as well sensitise the public to the operation before its full commencement.

“The only way to board the train is by using the cowry card with use of an automatic fair collection system.

” We will start sensitising our intended passengers that the train is electrified, it carried 750 volts power supply along the track, so it is very dangerous to cross.

“The sensitisation will commence immediately after the commissioning till the end of the first quarter, to enable Lagos residents to be aware of the train operation.

” The train is electrified and we have no business crossing rail, that is why we have implemented at every station constructed a pedestrian bridge that will take you across the expressway, where the blue line is situated,” she said.

Akinajo assured passengers of their safety, adding that all the train corridors will be fenced and there will be CCTV to monitor the corridor and responders will be there on time.

She hoped to get the understanding of the people to buy into it, adding that the train corridor had been fenced and there would be lots of signage.