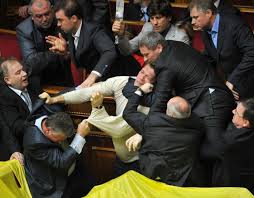 Television broadcasts showed the scuffle in the capital, Tirana.

Two dozen citizens were arrested about two weeks ago after they burned down newly installed pay points during protests against the launch of a motorway toll in the northern city of Kukes.

Report says the opposition supports the alleged perpetrators and is calling for their immediate release.