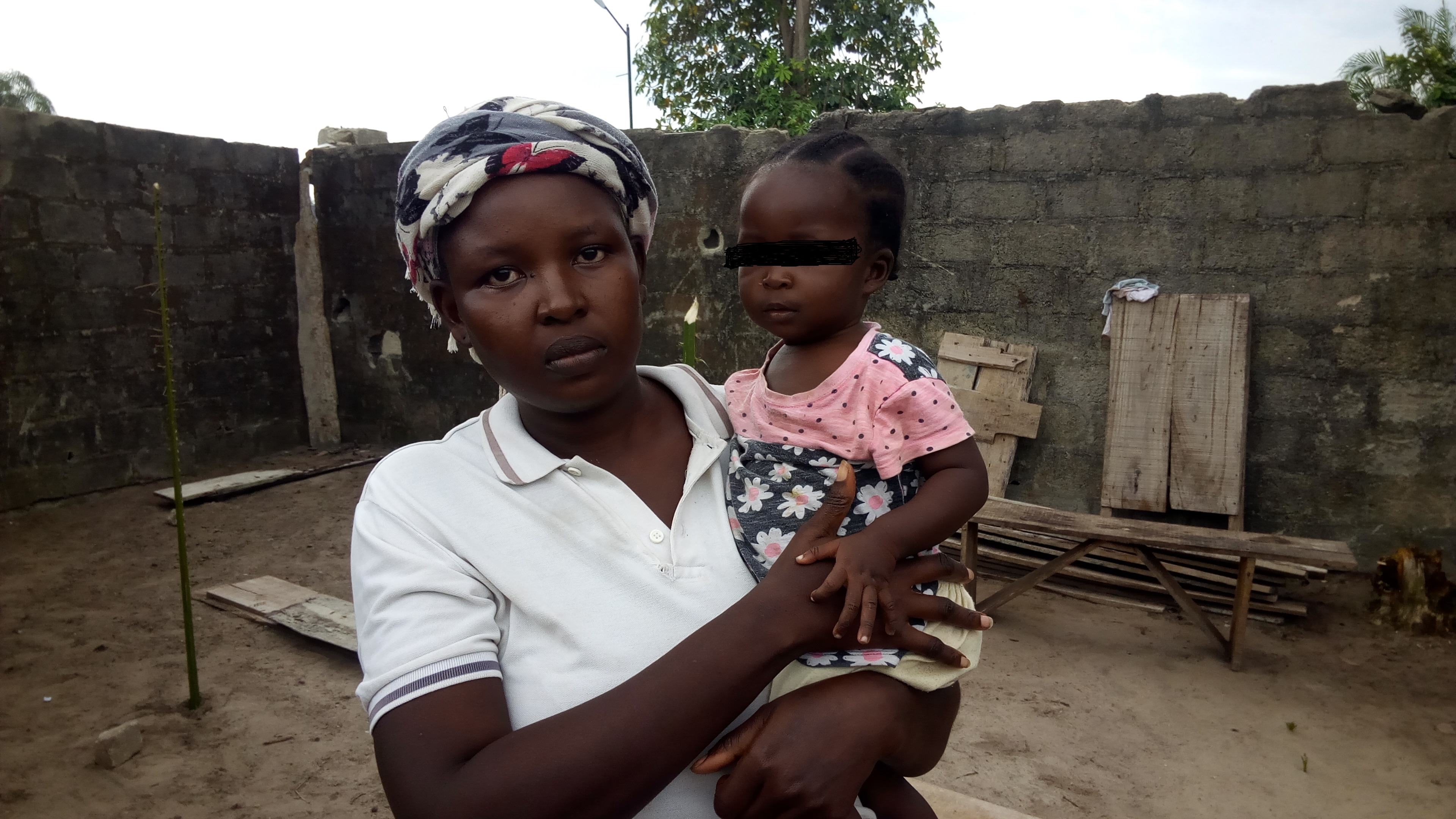 Last Saturday, 6th May, 2017, a farmer who also doubles as Tanker driver, Yusuf Mohammed from Kwara state was shot dead by a Mobile policeman attached to Lekki Gardens Limited, Phase 4 scheme along Ajah-Epe expressway on the flimsy allegation that he was a thief.

National Daily’s investigation revealed that the policemen didn’t see the victim face-to-face before shooting him. Secondly, the policeman shot Yusuf through the wall of the fence where he kept watch into the bush where the victim was hunting for snails with his friend identified as Michael.

In this exclusive interview with the victim’s wife, Mrs Fatima Yusuf Mohammed and the friend with whom they went for snail hunting expedition, gave shocking revelations of the decadence in the police system and the uncanny and bestial nature some policemen have condescended.

The interaction also revealed that the policemen neither catch the victim with anything stolen thing except the snails nor speak or halt the victim before shooting him living an open-ended question: What is the life of a Nigerian worth to an armed policeman paid with the tax payer’s money?

Mrs Fatima Yusuf Mohammed speaks on the last moment with her husband.

How was your husband killed by a Mobile policeman at Lekki Gardens estate phase 4?

Actually, I went to the market to sell and came back late that day, the 6th May, 2017. In the evening, my husband told me that he was going to hunt for snail with his friend called Michael. He has been going to hunt for snails before. This is not the first time he would do it. He took his bag and two touch light and left.

What time of the night it was?

About 10pm. Later, one man ran to our place and said somebody has been shot in the bush. Immediately, I knew it was my husband because he told me he was going to hunt for snail.

As the mobile policeman shot him, he abandoned in the place and ran away. It was only Michael that was with him and ran to meet some boys who live around us that mobilised to bring him out of the bush. When they carried him to Lekki Gardens Phase 4 gate, I saw two MOPOL whom I begged to help me carry him to the hospital. They opened their gate, entered and locked it.

How many were they?

They were three policemen

Do you know their names and ranks?

I don’t know but always see one of them who is a Yoruba man at Lekki Gardens gate.

Did he die immediately after he was shot?

No, my husband didn’t die immediately. In fact, he spoke with me when I got there. He said, “Mama Aisha, tell them to help me, I am in pains.” Everybody saw him in front of phase 4 where the police lay him down bleeding.

After they brought him out and you saw him alive, at what point did he die?

They took him into a vehicle and drove away. I was not told that he had died until two days later when I started hearing from people that my husband was dead. I wasn’t told anything by the police.

Which part of the body was he shot?

He was shot in the leg. I learnt that the first bullet they fired went up but the second caught him in the leg.

I learnt police came there?

Has Panti called you?

What are they saying?

They said the Criminal Investigation Department are in charge of the case and I will be invited. I am still waiting for them.

Where you told where his corpse is now?

No. since he died, I have not seen his corpse neither did the policemen told me where it is deposited. I only heard from people that his remains have been deposited at the mortuary.

Who took him from phase 4?

He went to hunt for snail with somebody, has the friend took what happened?

Yes. He explained details of how they went to the bush and was later shot by the police. He said when people wanted to rescue him to the hospital; the MOPOL came back and arrested all of them while my husband was bleeding profusely.

With what has happened, if you see the Inspector General of Police, are you going to tell him thank you for the police killing your husband? What will you tell him?

I will ask for justice and appeal for help.

How do you see an average policeman now?

Mr Michael Aie, is a Benue state born welder. The 24 years old went on a snail hunting expedition with the late Yusuf Mohammed aka Alfa on the 6th May, 2017 behind Lekki Gardens estate, Phase 4 scheme along Ajah-Epe expressway. Unfortunately, an over-zealous mobile policeman shot him through the fence.

He was saddled with the responsibility of rescuing his friend. Sadly too, at the verge of achieving that, the same mobile policeman arrested him with his neighbours he had called to assist him, living the victim to bled to death.

Michael narrated to National Daily what transpired and how he kissed death.OKOSUN DENNIS serves you the sad narration.

You went with Yusuf Mohammed aka Alfa to hunt for snail. What happened?

On Saturday evening, he told me that we should go hunt for snails. We later went with two tough lights. We wore rain boot because he saw a snake the last time he went. We entered the bush from behind Lekki Gardens estate phase 4 and went to the back of those buildings. We had gotten some snails and were about parking them into the bag, than we heard a sound of gun.

Before the gun shot, did anybody stopped halt you?

No, nobody. “Nothing like who is there? We could even hear people discussing across the fence while we were busy picking snails close to a plantain tree. I asked him, where was the gun coming from? He said it could be from hunters. I further asked: if they were hunters, they couldn’t have been that close to us? Thank God our voice was loud enough to be heard in some distance. Yusuf said we should concentrate on what we were doing. Almost immediately, a second gun shot was heard and it hit him on his leg and he fell down.

At that point he was shot, did the police come to you?

How many were they?

Did you see their rank?

No. I told them that we were not thieves but hunting for snails. I even showed them the snails in the bag. He warned us not to move or else he will waste us with more bullets.

ALSO SEE: How my husband was killed by a policeman at Lekki Gardens phase 4 scheme

I tried to carry him up and eventually had to tie his leg with his cloth to reduce the bleeding. The police left us there and quickly ran out to call people.

When you brought him out, what happened?

The policemen seized the victim and took him to Lekki Gardens Phase 4 gate. They entered the estate; brought out a car with which they took him to Ogombo Police Station.

When and where did he died?

In the hospital I was told

Did you know the hospital?

Where is his corpse?

Police said he is in the mortuary

You were with him and saw it all. Did you actually went for snails or had other things in mind?

No, we went to hunt for snails and had no ulterior motive.

Have you been hunting for snails before?

Yes, we do it often in the surrounding bushes.

How will you describe the deceased?

He is an easy going person. He neither looks for trouble nor does he keep late night. He never drinks alcohol. He does not steal. If he has N100, he is ready to share with you.

Have you made any attempt to reach Lekki Gardens because they brought the policemen?

People actually came out to demonstrate and attracted the attention of Lekki Gardens management. When they came, they condemned what the policemen did claiming that they didn’t send them. They appealed to us to calm down and would do everything possible to settle the family

What is the next step?

We have been called by Panti police station and still waiting for them before going there.

The police have not done well by killing an innocent person especially when there was no word from them before turning their gun against us. I was just lucky to be alive. Nigerian policemen deserve better training. How could a policeman shoot through the fence without bothering to find out who was there. A thief will not be talking or flashing touch light while going for an operation. It is really sad and I am disappointed at Nigerian police.