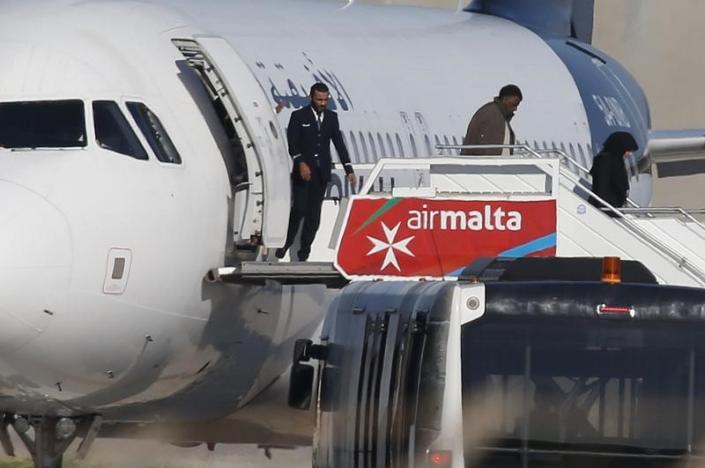 A Libyan passenger plane carrying about 118 people was hijacked by two gunmen perceived to be pro-Gaddafi supporters on Friday.

The hijackers who are believed to be armed with grenades forced the Afriqiyah Airways A320 plane to land in Malta where armed soldiers have surrounded it on the runway.

As a result, Malta officials have ordered diversion of other planes until further notice.

Meanwhile, the Hijackers are said to have demanded the release of Gaddafi’s son Saif al Islam Gaddafi from prison or they will blow off the plane.

Final crew members are said to be leaving the plane with the hijackers as other passengers and crew members, most of who are Libyans passengers have been freed; allowing them to walked down the steps from the hijacked plane at Malta International Airport on Friday.

The Malta’s Prime Minister Joseph Muscat tweeted that a first group of 25 had been freed and the release of others have begun.

President Marie-Louise Coleiro Preca of Malta has called for the public to exercise calm.

In a tweeter handle, “Following the news re #Afriqiyah Airways @Maltairport, I appeal for everyone to remain calm and follow official updates,” she tweeted.

The aircraft had been on an internal flight in Libya on Friday morning when it was diverted to Malta, 500 km (300 miles) north of the Libyan coast, after a hijacker told crew he had a hand grenade.

Initial reports said the hijacker had told crew he was “pro-Gaddafi” and that he was willing to let all 111 passengers leave the Airbus A320, but not its seven crew members, if their demands were met.

Although the demands are unclear, reports indicate that there was more than one hijacker. Former Libyan leader Muammar Gaddafi was killed in an uprising in 2011, and the country has been racked by factional violence since.

A senior Libyan security official said that when the plane was still in flight on Fridaymorning the pilot told the control tower at Tripoli’s Mitiga airport it had been hijacked.

“The pilot reported to the control tower in Tripoli that they were being hijacked, then they lost communication with him,” the official said.

“The pilot tried very hard to have them land at the correct destination but they refused.”

It was gathered that the aircraft had been flying from Sebha in southwest Libya to Tripoli for state-owned Afriqiyah Airways, a route that would usually take a little over two hours.

The government of the tiny Mediterranean island, a European Union member, said Muscat had discussed the hijack with Libyan Prime Minister Fayez al-Sarraj by phone, and a negotiating team had been formed and was at the airport.

The last major hijacking in Malta was in 1985, when Palestinians took over an Egyptair plane. Egyptian commandos stormed the aircraft and dozens of people were killed.

Share this on WhatsApp
Related Topics:Libyan passenger planepro-Gaddafi supporters
Up Next