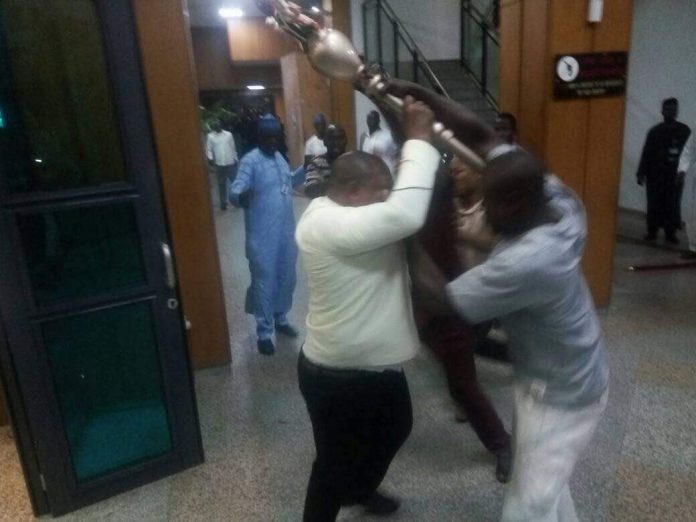 Contrary to reports that Senator Ovie Omo-Agege was arrested following the seizure of the mace in the Senate on Wednesday by thugs linked to him, the police says the senator was merely escorted out of the NASS complex–from his angry colleagues.
FCT Commissioner of Police Sadiq Bello led others cops to extract the senator from the pandemonium.
He was first driven away in a black Toyota Hilux pick-up before he came back to attend the plenary with his colleagues.
Neither the CP nor the FCT Command PRO has spoken officially about investigating the senator’s complicity in the seizure of the mace.
The Force headquarters have not spoken either.
Omo-Agege landed in trouble for saying the Senate tweaked up the Electoral Act to tilt the scale against President Muhammadu Buhari who is contesting in 2019.
Although he apologised for his comment, the upper house however probed him, and recommended him for 90-day suspension last week.
Omo-Agege had earlier gone to court to stop the Senate from acting on the probe panel report, and the Senate has been ordered to open its defence.
The Delta senator is among the 20 pro-Buahri senators currently locked in war of loyalists in NASS.
On the other side are senators who are loyal to the leadership of Sen. President Bukola Saraki who has been opposing his party leader and prresident.