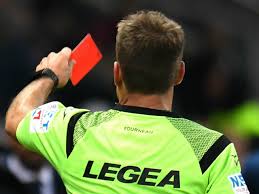 Strange, but true as an Italian football referee Antonio Martiniello incurred the wrath of Italian FA with a one year ban from officiating or attending football matches.

National Daily gathered that the ugly weird incident occurred after Martiniello headbutted a goalkeeper in a regional league match.

Though the hosts held on to win 3-1, but the goalkeeper Mogliamo headed to the dressing room after the match to seek an explanation, but only to realize that Martiniello still had more punishment to dish out to him when he was headbutted by the referee as the pair faced off in the corridor.

Mogliamo was taken to the hospital afterwards for treatment and was later discharged.

Martiniello will be prevented from officiating matches for the next year, and is also banned from entering the facilities of any teams in Italy’s professional, minor and amateur leagues, as well as attending matches involving the Italian national team National Daily further learnt.

The Macerata police chief has said the ban was fully warranted, because Martiniello had failed to set a good example for youngsters.