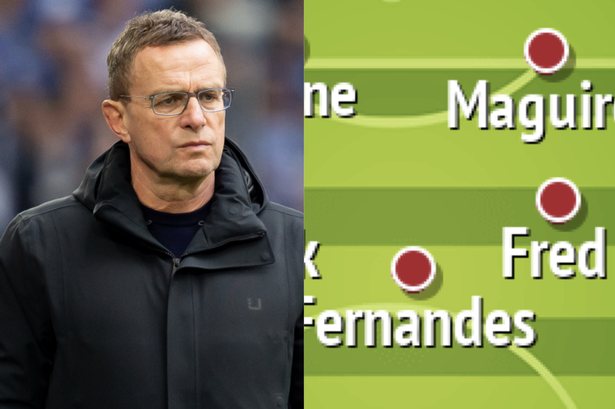 The 63-year-old German who was appointed as United’s interim manager on Monday will oversee the activities at Old Trafford until the end of the season when he will thereafter move into consultancy role for the next two years.

Rangnick who was in the stands at Old Trafford on Thursday to watch United narrowly beat Arsenal under former caretaker boss Michael Carrick is believed to have and picked the same side that defeated the Gunners for Sunday’s visit of Patrick Vieira’s Crystal Palace.

Explaining his team selection, Rangnick said: ‘The team did well against Arsenal, especially in the second half. As everyone was fit and available, there was no reason to change the XI.’

On Martial and Lingard’s absence, Rangnick said: ‘Jesse and Anthony indicated after training [yesterday] that they didn’t feel well, they felt pain. That’s the reason they are not in the squad.’

Rangnick begins his reign as Manchester United interim manager with the club seventh in the Premier League, six points behind fourth-placed West Ham and 14 behind leaders Chelsea.

Much has been made of Rangnick’s style of football since his appointment and the 63-year-old explained what fans can expect from his team in the build-up to Palace’s trip to Old Trafford.

He said: ‘My football is definitely not a slow waltz! I am not that far apart from [Liverpool manager] Jurgen Klopp in terms of our ideas about a style of football. That’s no secret.

‘But you have to be aware of what kind of players you have and where they stand. I cannot ask things of them that they can’t deliver right now.

‘I have to take them [the Manchester United players] and accept where they currently are. They are experienced and smart enough to know that.

‘I cannot turn the players we have into the pressing monsters I want them to be within two, three or four weeks.’

Meanwhile,  Crystal Palace manager Patrick Vieira has made two changes from the Crystal Palace team that lost 1-0 to Leeds United in midweek, with Nathaniel Clyne replacing Joel Ward and Christian Benteke coming in for Odsonne Edouard.