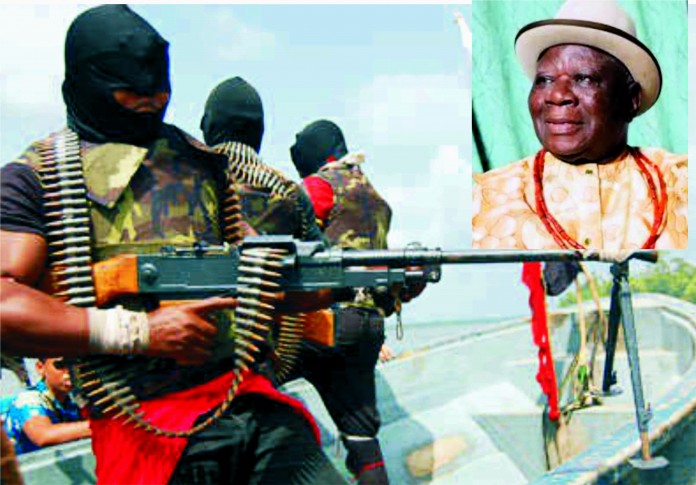 • FG at crossroads of peace deal
• As Okah brothers bounce back

LEADERS of the Movement for the Emancipation of the Niger Delta (MEND) has issued a stern warning to an elder statesman in the zone, Chief Edwin Clark, to desist forthwith from manipulating the dialogue proposal between Niger Delta stakeholders and the Federal Government.

MEND has been in the forefront of the dialogue arrangement since the violent uprising of the Niger Delta Avengers (NDA) escalated. MEND had constituted a team called Aaron Team 2 which Odein Ajumogobia is leading for the dialogue with the Federal Government. The Niger Delta Avengers had initially dissociated themselves from the negotiation being organized by MEND until the Governor of Delta State, Dr. Ifeanyi Okowa, and Chief Edwin Clark intervened and prevailed on the merchants of violence for a change of heart. This perhaps, culminated into the temporary ceasefire by the Avengers.

During the recent meetings convened by Governor Okowa and Chief Clark, MEND had admonished that people should disregard both the governor and the elder statesman, insisting that the Aaron Team 2 constitutes the authentic delegation for the dialogue;.

MEND aligned with several other stakeholders form the Niger Delta sub-region in a seeming vote of no confidence on Clark, who they subtly accused of betraying the zone in the previous administration. The elder statesman is being accused of taking advantage of former President Goodluck Jonathan to enrich himself the more. The discontent stakeholders are of the view that Clark was one of the closest political actors to the former President but never considered it necessary to prevail on Jonathan to pay special attention to the development of the Niger Delta which has continued to suffer deprivation from the federal government.

Prior to the current dispute over the dialogue delegation, Clark and some other Ijaw leaders had contended that MEND lacks the mandate to lead the Niger Delta people to negotiation with the federal government.

At a meeting convened by Clark penultimate week, an Ijaw leader was cited to have questioned: “Is MEND part of the groups bombing pipelines? Has it not been disbanded?” Alaowei Brodrick Bozimo, a former minister, Governor Seriake Dickson of Bayelsa State, Governor Okowa, were identified as participants at that meeting.

Udengs Eradiri, President of the Ijaw Youth Council (IYC), was cited to have declared inter alia: “They are talking with unknown group leaving the Niger Delta Avengers or their accredited representatives. And Ijaw leaders who will speak to their people are not part of the dialogue. Ijaw has not mandated anybody to negotiate on our behalf.”

Eradiri had contended that President Muhammadu Buhari is not prepared for dialogue and resolving the Niger Delta crisis. He maintained that when the President is reread, “he will invite leaders for meeting, which he will preside, and that is when we will know that government is serious and not speaking through ministers or aides, who do not have mandate of the president to organize a meeting.”

Some of the personalities in the Aaron Team 2 put together by MEND include former Senate President Adolphus Wabara, a former Minister, Odein Ajumogobia, His Royal Highness, King Alfred Papapreye Diette-Spiff, Amanyanabo of Twon-Brass in Bayelsa.

MEND further put the card on the table before the federal government that Government Ekpemupolo (Tompolo) should not be arrested, “whenever he makes himself available as a delegate of the MEND Aaron Team 2.”

Meanwhile, there were innuendoes that the Okah brothers are influencing the MEND dialogue project. They were said to be tele-guiding the pre-dialogue arrangements by MEND from their prisons.

Henry Okah, leader of MEND, is serving in a South Africa prison while Charles Okah, his brother in Kuje Prison where he is being detained while his trial continues in court.

Sibiri Taiowoh, spokesman of Niger Delta Warriors (NDW), an emergent militant group in the zone, had in a statement declared among others: “We want to use this medium to send a strong warning to the federal government to be wary of those using the defunct Movement for the Emancipation of the Niger Delta (MEND) to seek political relevance and to free incarcerated Henry and Charles Okah who are dishing out commands from their prisons.”

NDW had accordingly admonished, “Their proposal would cause more crisis in the Niger Delta if the government fails to heed our persistent warning. The MEND that is issuing statements is just a scam. It is a diversionary and a divide and rule vehicle deployed by some jobbers. You will follow them at your own peril.”

“We would rather advise the federal government, if it really wants genuine peace, to leverage on what Clark and the Governor of Delta State, Dr. Ifeanyi Okowa, started in Warri, Delta State, and start the dialogue that would involve all ethnic nationalities in the Niger Delta region,” NDW had insisted.

This group had questioned why the federal government is focusing on only the Ijaw nation and disregarding other nationalities in the Niger Delta.

The group maintained, “We are still observing the ceasefire as a mark of respect for our elders, leaders and various stakeholders who have pleaded with us because we want development to come to our impoverished people.”

Mudoch Agbinibo, spokesperson of the Avengers reaffirmed NDA adherence to the.
The militant groups observing the ceasefire however, cautioned: “If Henry and Charles Okah want amnesty which they rejected because they want to continue with their gun running business, they should do that quietly without rubbing it on our face. MEND should not push us into facing them.”

MEND, however, vowed to dissociate the group from the dialogue if the federal government holds separate negotiation with the team led by Clark on behalf of the Niger Delta Avengers.
MEND had in a statement by Jomo Gbomo, its spokesperson, declared, “It is imperative to emphasise that the Federal Government of Nigeria must not set a precedence of dialogue with criminals.

“If, on the contrary, the Federal Government chooses to hold a separate dialogue with the NDA team led by Chief Clark, MEND shall immediately disband the Aaron Team 2 and pull out of the ongoing talks. We insist that the NDA, their patrons, sponsors, supporters and sympathizers are criminals and haters of the current administration (as revealed by the Reformed Niger Delta Avengers RNDA) who must publicly renounce all forms of hostility against Nigeria. Once this is done, MEND shall embrace the NDA and their co-travelers.”

Commending the decision by the NDA to observe a ceasefire and suspend attacks on oil installations for the dialogue to progress, MEND was said to have disagreed with the NDA on the choice of Clark to lead their team for a dialogue with the Federal Government.

MEND was gathered to have also emphasized that attacks on oil installations to force concessions from government were no longer fashionable, noting that the group stopped all forms of hostility against economic assets of the country since May 30, 2014.

MEND had further argued that at almost 90 years of age, Clark would not be able to stand the rigours of dialogue and negotiation of the Niger Delta question and, as such, should not be considered to lead the negotiation team of the NDA.