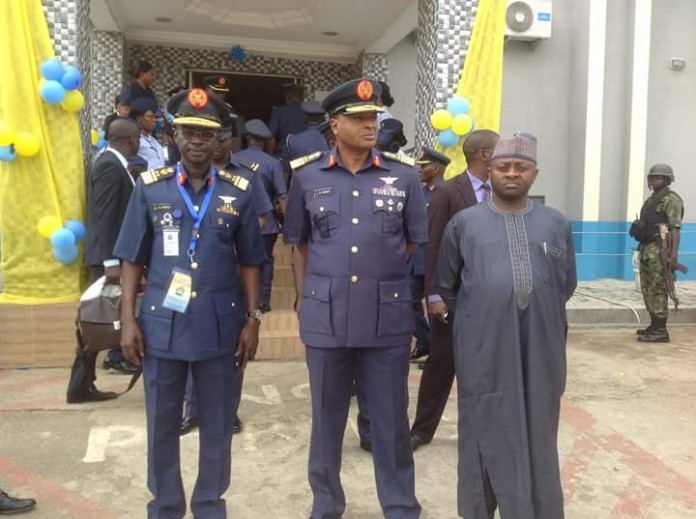 The Chief of Air Staff (CAS), Air Marshal Sadiq Abubakar, said in Lagos on Tuesday that his desire as the air Chief was to ensure that no part of the country was under any form of threat by insurgents or other criminal elements.

He explained to achieve that, we must have sound logistics strategy to ensure that materials and spare parts are required were available.

The Chief of the Air Staff (CAS) Air Marshal Sadiq Abubakar disclosed this at the opening ceremony of the NAF Logistics Seminar held in Lagos.

He disclosed that to prosecute the war against terrorist group, Boko Haram in the northeast, the Nigerian Air Force (NAF) consumes an average 1.9 million litres of average fuel each month.

According to the Air Chief, the NAF has managed to continue its operations across the country despite the scarcity of aviation fuel because it was determined to ensure that no Nigerian territory was under siege.

He said: “To support air operations in the northeast, the NAF must put an excellent plan that will ensure availability of aviation fuel in the operational area, whether the product is locally available or not.

“The main fighter air plane we use, consume 2500 litres/hour and we fly at least two air planes at a time. At that consumption rate, the two consume 5000 litres every hour and we run two missions. So we are talking of about 10000 litres just for one aircraft time. We have so many other airplanes like the Alpha jets which consumes 2400 litres/hour.

“They also fly in formation  and that means about 4800 litres. There are other air planes that fly on daily basis. Our logisticians therefore must work assiduously to ensure the product is available for operation. In a war situation, no excuse is acceptable. To ensure we build capacity in logistics planning, the NAF has embarked on training and retraining both within and outside Nigeria.”

According to him, the seminar was apt, considering the current security situation in the country which requires discipline and detailed planning.

“To address the situation, the NAF must have a planned strategy not only for the movement of equipment and personnel to theatre of operations but also for the maintenance of its air assets. It is only when we get the strategy right that we can hope to effectively and efficiently deploy air power necessary to address the challenges facing Nigeria,” he said.

In his address, Dan-Ali assured that more Boko Haram hostages would be rescued. He commended security personnel who have made huge sacrifices to ensure the country stays united.

“Combat operations against insurgents in the northeast still ongoing. NAF has remained a major player in carrying out aeriel bombardment leading to the destruction of Boko Haram elements’ camps and dislodging them from their strongholds within  Sambisa Forest and adjoining enclaves.

In his welcome address, the AOC, Logistics Command, Air Vice Marshal Sani Ahmed lauded the Air Chief for his concerted efforts to enhance facilities and infrastructure of the service.

He stated that the Logistics Command was poised to provide robust logistics support for the NAF fleets, adding that they were striving to evolve a credible, responsive and responsible logistics system that would guarantee timely, effective and efficient air support in all theatres of operation.