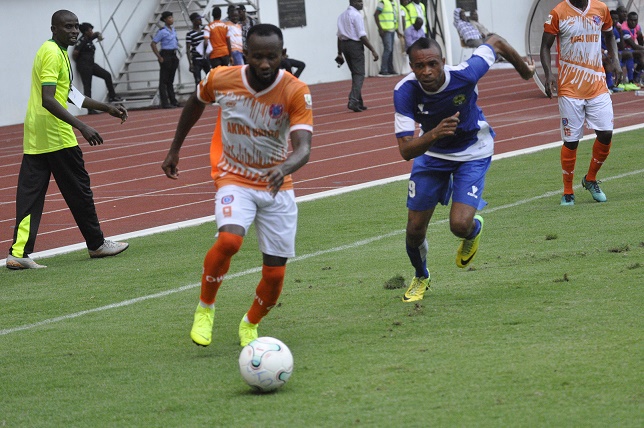 Share this on WhatsApp
Spread the love
By Esther Egbe
The 2019 Eunisell Boot awards was  recently held at the magnificent Raddison Blu hotel,Ikeja to celebrate and reward  Mfon Udoh of Akwa United and Sunusi Ibrahim of Nasarawa United  for their hard work as they both notched 10 goals each as they topped goal scoring chats, National Daily learnt.
One of the people that watched from the crowd at the hotel, Iwas the man who nurtured and watched Ibrahim Sunusi grow from that toddler to one of the most deadly player currently in the NPFL.
Coach Ibrahim Usman told National Daily that he was the man who saw and discovered Sunusi Ibrahim while he was in the primary school in Keffi and ever since the story of the teenage player has been on a steady rise as he came from FC Basira to sign for Nasarawa United .
He explained that as a youth coach my main objective then was to just discover players at their raw she stage, moving from small grounds to watch kids play, you need not to watch them twice, just by ball control you will definitely know if truly a player is good or not, I saw Sunusi Ibrahim in one of my local scouting programs and the rest they say is history.
“I got him then took him to the Milo u13 championships in Lagos were we lost 3-1 to Oyo in the finals and Sunusi was voted the MVP before he proceeded to play in Airtel rising stars u15 at the Agege stadium”.
ALSO READ:Mfon Udoh top player of week ten in NPFL
“His meteoric rise never caught me unaware as I was moved to tears as he was handed the eunisell boot, I was so moved because so many young players pass through the same program,  but could not hit it just as Sunusi did and I can authoritatively attributes this to his dedication, self discipline and commitments”.
“I pray may the Almighty God help him to sustain these attributes and remain level headed so as to make it big in the round leather game, he concluded.
Share this on WhatsApp
Related Topics:FC BasiraNasarawa United
Up Next