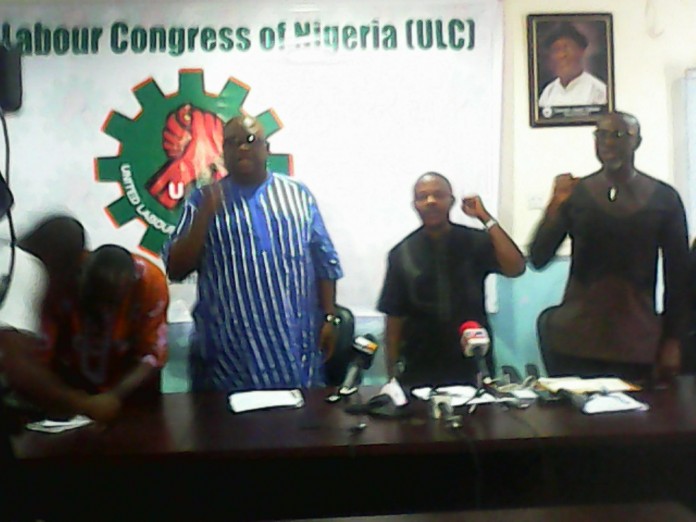 The United Labour Congress has indicated displeasure over the resolve of the Governor’s forum to pay a minimum wage of N22,500 contrary to the earlier agreed N30,000, citing the deliberate renege by the governors as a contemptuous and a brazen negation of social dialogue.

It would be recalled that the organized labour held a rally tagged, ‘A day of National Mourning& Outrage’ to state their stance on the matter, making a clear divide on what obtains in other climes and sensitising the public about the national minimum wage impasse on Tuesday.

According to ULC’s President, Comrade Joe Ajearo, going outside the known framework to seek the resolution of the contrived Minimum Wage impasse is devious. It undermines Tripartism and the various traditions that govern responsible and equitable engagement of the Social partners – Workers, Employers and Government. A sensitive Government is not expected to reject tested and proven frameworks and
processes for civil engagement but this is what this Government has chosen to do.

ULC in the face of the sabotage has resolved to tackle headlong along with other labour fronts the alleged anti-workers move staged managed by the Governor’s forum.

“The only figure that we now recognise is N65,000 or nothing else.

This shall be the focus of our demand as we move into the nation-wide strike come Tuesday, the 6th day of November, 2018.

“Drafting in that inglorious political Forum at this time is a clear sign that Government is prepared to continue politicising the right of workers to an acceptable Wage Floor thus exacerbate the marginalisation and exploitation of Nigerian workers and masses. This is deplorable.” Ajearo reiterated.