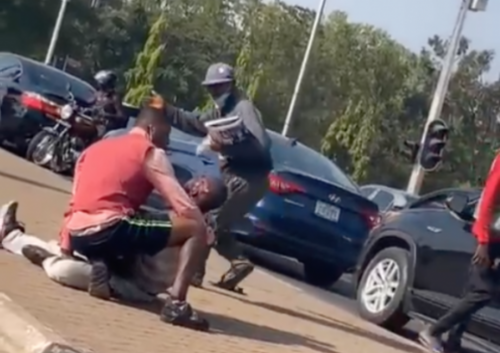 While the federal government is struggling to talk down the October 20 ENDSARS Lekki Toll Gate shooting scandal by Nigeria security agents, and the bad press the incident gives the nation, another collateral damage happened in Abuja Thursday. A hustling newspaper vendor and young father was the victim of this. And the nation’s No. 4 man is right in the middle of it.

Reactions about police recklessness have been pouring since a security agent on Speaker Femi Gbajabiamila’s security mortally shot a vendor in the head. The cop claimed he intended to shoot in the air when a crowd of vendors and other regular citizens huddled round Gbajabiamila’s car at the Federal Secretariat area in Abuja.

The victim, identified as Ifeanyi Elechi, was quickly rushed to the National Hospital by his brother and some police officers.

But he died later Thursday evening. Early in the day, his wife just gave birth to a baby.

The accounts of the incident vary. That’s not unexpected.

According to Etim Eteng, chairman of the Newspapers Vendors Association in FCT, Gbajabiamila called, as he always does, to give the vendors money, and the security aide just shot Elech in the head.

Eteng said the association would not allow the matter to be “swept under the carpet” because the killing did not result from accidental gunfire or stray bullets.

Others said while the Speaker was doling out cash, a gun just went off, hitting the victim in the head, and the shooter could not even explain why he shot.

Gbajabiamila himself has his account, moving. He too confirmed the flesh-pressing sessions he usually has with the vendors anytime he passes by that area

“My value for human life and my respect for all people—irrespective of socioeconomic status—is what endeared me to these vendors, and these are the reasons why I stop my convoy quite often to connect with them,” he said.

“For one of them to have been shot by my security detail is horrific, and I cannot begin to imagine the grief and loss of Ifeanyi’s family must feel on this sad day. No family should have to go through this.”

Lack of respect for human life has been an issue gnawing at Nigeria’s security agencies for years. And that is further reflected I poor human rights record of the police and army in particular.

Years of pent-up anger exploded in a two-week protest against the Special Armed Robbery Squad of the Nigerian police in October.

The protest degenerated into large-scale violence which claimed 58 civilians and more than a score police and army officers across the nation. All of these in addition dozens of police stations torched and private businesses looted.

Gbajabiamila said he ensured the Thursday matter was reported to the division police station, and an investigation has commenced.

“In the meantime, the officer who fired the fatal shot has been suspended from the convoy pending the conclusion of the investigation,” he added.

Security watchers have always worried about police use of excessive force when de-escalating a potential threatening situation.

Going by Gbajabiamila’s explanation, the crowd of his fans and well-wishers didn’t pose any threat that required shooting in the air—let alone accidentally shooting into the crowd.

According to the vendors who witnessed the incident, the killer officer is not a police man.

The FCT command of the police has equally denounced the shooter as its members.

“Contrary to the misleading information, a preliminary investigation into the unfortunate incident reveals that the security aide who shot at the vendor is not a member of the Nigeria Police Force,” the command spokesman Mariam Yusuf said in a statement.

Commissioner of Police Bala Ciroma has also ordered a discreet investigation into the incident as he commiserated with the family and friends of the dead victim.

Vendors in Abuja have started rallying and demanding justice for Elechi.

What the demand can trigger in the wake of the ENDSARS protest is not certain yet.