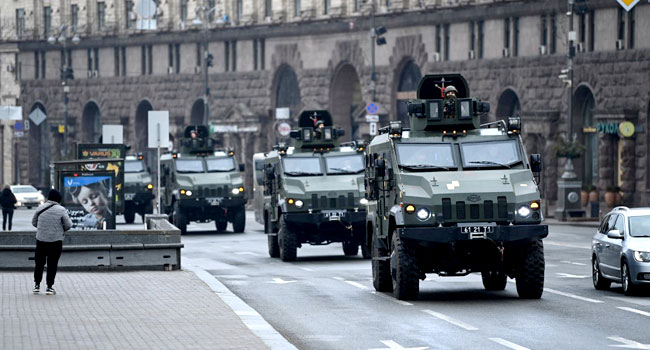 Russia is offering a fresh Ukraine ceasefire for Tuesday, Moscow’s Ambassador to the United Nations Vasily Nebenzya said, amid efforts to get civilians to safety.

Speaking at the UN Security Council in New York, Nebenzya read from a statement from the authorities in Moscow.

It offered a ceasefire from 10 am Moscow time (0700 GMT) on Tuesday to open a humanitarian corridor or corridors to evacuate citizens from Kiev, Chernihiv, Sumy, Kharkiv and Mariupol.

It also included an offer to evacuate Ukrainian cities to the west of Kiev.

There were small but positive steps in improving logistics for the humanitarian corridors in embattled cities, Ukrainian official, Mykhailo Podolyak said after a third round of negotiations with Moscow.

Representatives of the two countries met for a new round of peace talks in Belarus on Monday, on the 12th day of Russia’s invasion of Ukraine.

Russian negotiator, Vladimir Medinsky said there should be a new attempt on Tuesday to get people to safety via the corridors.

However, he expressed overall disappointment after the meeting.

“The expectations were not met,’’ Medinsky told Russian state television.

The Russian side brought a number of prepared documents to the negotiations.

The Ukrainians did not want to sign anything, but took the papers for examination.

According to Medinsky, another round of negotiations is expected soon, during which the agreements can be put in writing.

The head of the Ukrainian delegation, David Arakhamia, on Sunday had rejected Russia’s central demand for any peace agreement as not acceptable in an interview with Fox News.

Russia demanded that the Crimean Peninsula, which it annexed in 2014, be formally ceded to Russia.

In addition, it wanted the regions of Luhansk and Donetsk, controlled by pro-Russian separatists, recognised as independent states by Kiev.

Moscow was also demanding the complete “demilitarisation’’ of Ukraine and that it became a neutral buffer state.

“Currently the March 10, is planned. Let’s see if he flies to Antalya, then I’ll fly too. Let’s sit down, let’s talk,’’ Kuleba said in a video message.

Turkish Foreign Minister Mevlüt Cavusoglu had previously said both sides were expected in the Turkish city of Antalya on Thursday.

The talks were likely to take place with Cavusoglu in a three-way format.

Meanwhile, the Ukrainian ambassador to Israel said that Jerusalem could be a venue for high-level talks between the two sides to end the war, telling reporters in Tel Aviv that Ukraine saw Israel as a close friend.

Ukrainian President, Volodymyr Zelensky vowed to remain in the country’s capital in spite of the ongoing fighting there.

“I am staying in Kiev,’’ he said in a video message.

He said he would not hide and wasn’t afraid of anyone.

“Today is the twelfth night of our struggle, our defence. We are all on site, everyone is working. Everyone where he has to. I’m in Kiev, my team is with me,’’ Zelensky added.

As the fighting in Ukraine continued, at least 13 civilians were killed during a Russian airstrike to the west of Kiev on Monday.

Russian troops were stationed to the north-west of Kiev and are trying to advance on the capital from the west.

Authorities in Ukraine’s second city Kharkiv announced that 133 civilians were known to have died in the city since the start of the war.

A further 76 Ukrainian military personnel had also died in fighting in the city.

The total number of civilians killed in the Ukraine had risen to at least 406, according to UN figures announced on Monday.

In spite of the evidence to the contrary, Russia maintained that no civilian targets in Ukraine were being attacked by its troops.

Elsewhere in Ukraine, Russian troops took control of the airport in the southern city of Mykolaiv on Monday but was back in Ukrainian hands just a few hours later, according to Mykolaiv Oblast Governor Vitaly Kim.

Meanwhile, a senior U.S. Defence Department official said Washington would be sending another 500 soldiers to Germany, Greece, Poland and Romania to reinforce its presence in Europe.

Among other things, their task would be to support efforts to protect NATO airspace.

In New York, the U.S. ambassador to the UN told an emergency meeting on the humanitarian situation in Ukraine that the United States expected an ongoing conflict in Ukraine.

“We are concerned that the world needs to be prepared for very long and very difficult road ahead,’’ Linda Thomas-Greenfield said.

In Washington, the World Bank said it had mobilised some 720 million dollars in loans and aid to help the Kiev government provide critical services to Ukrainian people amid Russia’s war on the country.