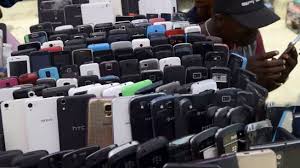 Share this on WhatsApp
Spread the love
A report by a UK based tabloid has named Nigeria’s Computer Village in Lagos as being at the end of the chain for various smart phones, especially iPhones stolen from the United Kingdom.
According to the report, thugs who move around with motorised bicycles, also known as mopeds, often arm themselves with acid to scare victims and make away with their phones — iPhone users being the major victims in the UK.
“Sun investigators discovered ‘UK used’ iPhones being sold for £560 in stores and markets in Nigeria’s largest city Lagos. Business is booming for the Nigerian racketeers because of soaring demand from the oil-rich middle classes in a country where hi-tech gadgets are relatively scarce,” the report read.
“And because Nigeria has not signed up to a global deal blacklisting stolen phones, British moped gangs are able to keep the crime bosses supplied by exporting tens of thousands of snatched mobiles.”
Between June 2016 and 2017, UK Metropolitan police recorded 16,158 phone crimes related to mopeds, three times more than the previous year’s record, the report said.
“The Sun’s investigation highlights that there are still parts of the world where stolen phones can be unblocked and sold on. All that is required is a new SIM card — and away you go,” Mick Neville, former Met detective chief inspector, was quoted to have said.
“A combination of corrupt officials, unscrupulous businesses and a booming demand for Western technology makes Nigeria an ideal place for handlers to send stolen handsets.”
Reacting to the report, a Lagos police spokesman was quoted to have said: “I am not aware that stolen phones from the UK end up in Lagos. If there is a complaint about a stolen phone in Lagos we shall investigate it.”
European countries, US and South America have signed a deal to blacklist stolen devices. Under this agreement, each phone has a unique number which is added to a global database when it is reported stolen, making it useless in the countries that are signatories to the agreement.