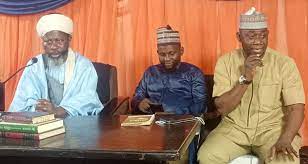 A Muslim group, the Muslim Congress (TMC), at the annual state lecture organised in commemoration of Nigeria’s 62nd Independence anniversary in Akure, Ondo State, canvassed that Nigerians must vote for a purposeful leader that is ready and willing to drive the desired change in the country in the 2023 general elections.

Bangbala, represented by Mallam AbdulWasiu Babalola, Ondo State Amir of TMC, at the lecture with the theme: “Restoring Our Pristine National Values”, emphasized that the trajectory of national development had been fraught with societal failure and leadership challenges. He said that values are lost on citizens, stating that the leaders are culpable just as the rest of the citizens.

He said that it has become better for citizens to rise above the rot that has eaten deep into the system.

The Amir declared: “If we must be honest with ourselves, we would mostly agree that our nation is ailing and that the values we once held dear are now regrettably antiquated.

“The sooner we realise that the strength of the nation does not merely rest on its material or technological feat, but lies rather more in the moral qualities and level of moral consciousness that pervades the society.

“So, our collective mindset has to change for us to experience any meaningful development. And the starting point has to be the family

“And the leadership in this regards must go beyond political leadership alone but also community, traditional and religious leaders because of their pervading influence.”

The Amir challenged leaders in the country to empower government institutions to go down the basic, to drive the process of a comprehensive programme of attitudinal transformation. He expressed  that there must be concerted efforts directed at embracing critical values that could regenerate the society, especially in the face of growing challenges of indiscipline, dishonesty and zero integrity.

Bangbala also urged  traditional and religious leaders to desist from the discriminate award of chieftaincy titles and religious honours to people of questionable wealth.

“There still exists extensive negative attributes holding us down as a nation.

” With deeper reflection, it becomes even more apparent that the cause of our setback is rarely about good policies but more collective attitudinal stance,” he said.

Bangbala called on youths to shun thuggery and anything that could affect the general elections, saying that no cultured person with the right values would hijack ballot boxes or get involved in rigging an election.

Also, Dr AbdulHakeem AbdulLateef, Chief Imam, Lagos State House of Assembly Mosque, who delivered a lecture, said politics should not be left in the hands of unbelievers alone.

AbdulLateef said that all hands must be on deck to make the country great again, and urged everyone to play the role of leadership in their respective places.

The guest lecturer also said it was time for the legislature to enact and implement a law that would bring about good governance in the country.

“If we want Nigeria to retain her values again, our security agencies, judiciary, journalists, individuals, religious leaders and others must rise up to fight the menace in our society.

“Anybody involving in corruption should not be allowed to go scot free and issues of bribery should be discouraged with totality,” AbdulLateef said.