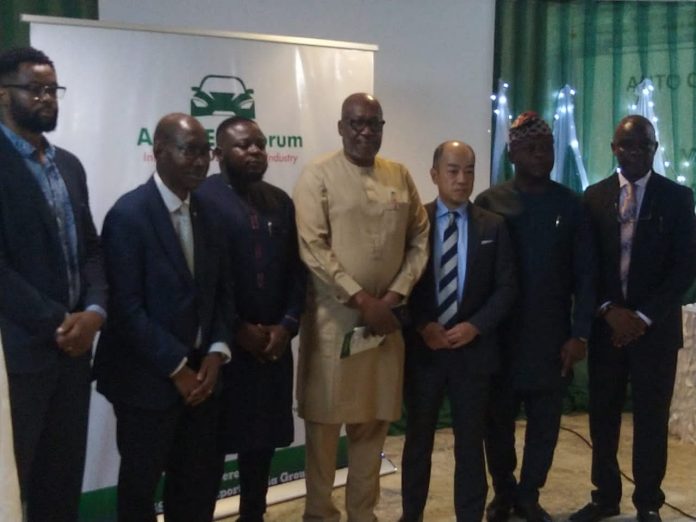 Share this on WhatsApp
Spread the love
Several billions of naira invested by the Federal Government in acquiring massive land and equipment for automotive projects may have gone down the drain, a former Acting Director General of the National Automotive Design and Development Council, Mr Luqman Mamudu, has said.
He stated this in Abuja, where chief executive officers of auto companies and other stakeholders called for a review of Finance Act making it difficult for for local auto assemblers to compete with sellers of fully built imported vehicles.
They spoke at Auto CEOs Forum, an interactive session involving major players, Ministry of Industry Trade and Investment, heads of relevant government agencies such as Nigeria Customs Service, Bureau of Public Procurement and National Drug Law Enforcement Agency, National Bureau of Statistics and National Automotive Design and Development Council.
READ ALSO: Dasukigate: Journalist union, traditional rulers, NGOs, auto companies to appear before panel Tuesday
Mamudu said the FG invested billions of naira to acquire the huge land and import needed equipment for industrial clusters in six major cities across the country to give the auto policy a sound footing.
For instance, he said in Ikorodu, Lagos State, while about N1bn was spent to bring in test equipment for a facility to test vehicles emission level, the government paid N300m for the land housing the test centre.
Mamudu however lamented that nothing was currently happening the Lagos centre and other places.
He debunked the insinuation the NADDC did not consult widely before the auto policy was put together, adding that for about six months the agency held meetings and with other agencies, relevant groups and auto players on the matter.
READ ALSO: NADDC, Customs, auto CEOs, others move to address industry challenges
He gave an overview of the policy, its objectives using a global template and the requirements to actualise the project such as incentives to attract investors/OEMs, acceptable credit facility for vehicle assemblers and buyers and anti-smuggling programme.
He said, “There is no need to change the NAIDP.  We need to review time taken for renewal of yearly licence. It doesn’t have to take five months.
The Comptroller General of NCS, Col. Hameed Ali, represented by Controller Musa Mba, said the agency was carried along in formulating the policy.
According to him, they only implement the duty as passed onto the agency.
READ ALSO: NADDC reinstates commitment to auto policy implementation
Chairman of National Drug Law Enforcement Agency, Brig Gen Buba Marwa, who spoke through Mr. Gadzama Bashir, accused some auto importers of bringing in hard drugs.
Indeed, he said some import cars from Canada concealed with Colorado, a variant of cannabis sativa (Indian hemp).
He called for the cooperation of auto players to rid the country of banned substance.
Auto CEOs who spoke through Olutobi Ajayi of Nord Motors, Taiwo Shittu of Lanre Shittu Motors, and Deputy Managing Director, CFAO Motors, Kunke Jaiyesinmi, the current import duty of 10 per cent import duty for fully built units (vehicles) and 10 per cent for Semi-Knocked Down vehicles was  discouraging local assembly of vehicles.
There is no way local assembly plants can compete with FBU vehicle importers at 10 per cent duty. We buy diesel, pay workers, among other running cost but they don’t do,” said Ajayi.
They called for a review of the Finance Act
Share this on WhatsApp