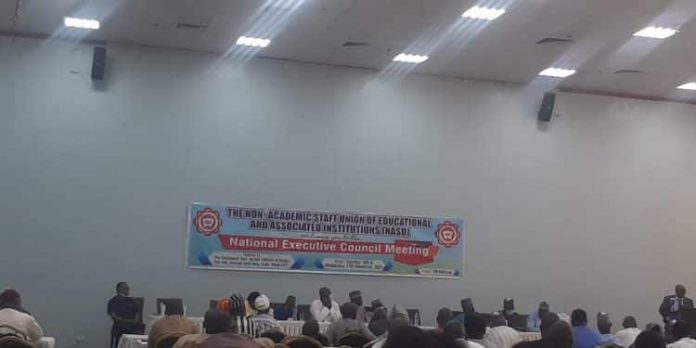 The Non-Academic Staff Union of Universities (NASU) has dared the federal government on the threat to implement a ‘no work no pay’ policy if the union calls out its members for a national strike.

The General Secretary of NASU, Peters Adeyemi, called on Nigerians to hold the government responsible for industrial actions in the tertiary institutions for its insincerity and lethargy in implementing the Memorandum of Action and Memorandum of Understanding agreed with workers for the many strike notices.

The NASU General Secretary declared that university workers will resist – any implementation of “No Work No Pay” being threatened by the federal government.

The General Secretary chided the Minister of Labour and Employment, Dr. Chris Ngige, on his utterance that the university “workers lack adequate knowledge of government’s efforts to resolving welfare issues, that is why they rush to go on strike.”

At the NASU national executive Council meeting, the NASU President, Hassan Makolo, and others decried government’s persistent delays to complete the adjustment of the Minimum Wage in tertiary institutions, as well as address other critical national issues, such as rising insecurity, increasing debt profile and the associated debt servicing burden, increase in electricity tariff, high pump price of petrol, dwindling economy, bad governance at the three levels of government, etc.

They demanded that governments should perform their responsibilities to citizens according to their respective mandates.