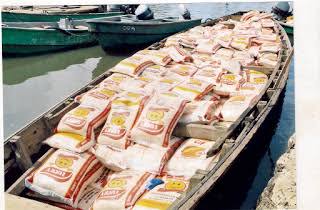 Operatives of the Nigerian Navy (NN) have arrested two wooden boats laden with 502 bags of rice in Akwa Ibom said.

The bags of rice valued at over N10million were said to have brought to 919 the total number intercepted by the navy this month and 9,489 since January.

According to Director Naval Information Commodore Suleiman Dahun, the arrest was made by operatives attached to the Forward Operating Base (FOB) Ibaka around Parrot Island waterways and Mbo River.

“During the operation, nine suspects were also arrested, three outboard engines and two pumping machines were seized,” he said.

Dahun said the Naval Headquarters (NHQ) commended the sustained efforts of the base in checking smuggling activities, urging it to continue to stamp out all forms of illegalities.

“In a related development, FOB FORMOSO has handed over an arrested barge EBIZARH and a tug boat HEBIZARH with three crew members to the Economic Financial Crimes Commission (EFCC).

“The two vessels were arrested at Nigerian Agip Oil Company Terminal in Brass, Bayelsa State, for conveying 600 metric tonnes of suspected illegally refined AGO,” he said in a statement on Monday.