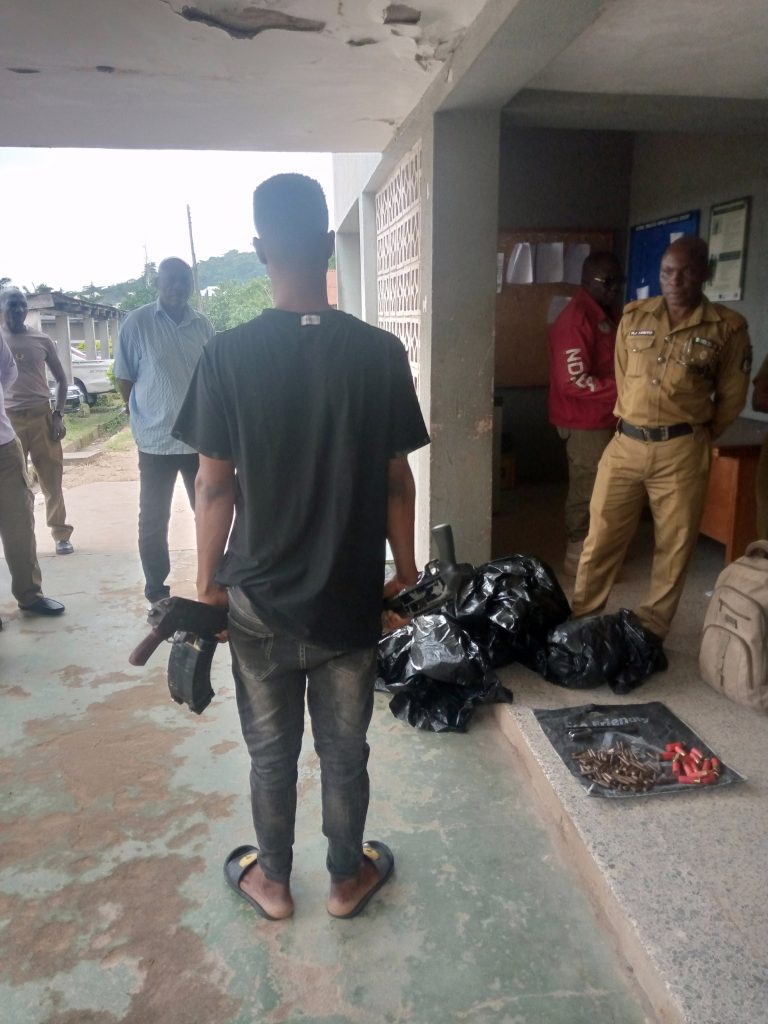 The Nigeria Drug Law Enforcement Agency (NDLEA) Ondo State command, says it has arrested a 25-year-old man, Destiny Agbaijoh, with an AK-47 riffle, a pump action gun and ammunition concealed inside a bag.

The NDLEA State Commandant, Mr Kayode Raji, while parading the suspect before the newsmen in Akure on Wednesday, said officials of the agency arrested the suspect during a stop and search duty along Ore-Okitipupa road.

Raji said the suspect who boarded a commercial vehicle, was found with one AK-47, one pump action, 91 bullets of 5.56 mm,16 cartridges and cash of N347,000 concealed in a bag during the search.

He alleged that the suspect wanted to bribe the operatives with the cash found on him but was rejected.

“This suspect was arrested on the 20th of July this year, along Ore-Okitipupa road by our men on stop and search operation.

“He was arrested with AK-47, which was discovered that the breach number has been tampered with, but the three magazines have an inscription that looks like the Nigeria Police.

“He was also arrested with one pump action with 91 bullets of 5.56 mm of live ammunition and 16 cartridges that are for pump action hidden in a bag.

“The sum of N347,000 was also seized from him. As a matter of fact, he had offered our officers the money as bribe so that he could be released, which was promptly rejected.

“We have done our preliminary investigation and we are going to hand him over to the Police,” he said.

The suspect who claimed to be a timber contractor, told newsmen that he got the bag containing the ammunition inside the bush in an unnamed village in Bayelsa.

“I saw the bag containing the guns and ammunition in the bush in Bayelsa. l don’t know it is a problem.

“I was coming from Bayelsa State and going to my town after Agadagba in Ese-Odo local government of Ondo State.

“The money is part of the proceeds from my timber business,” he said.

Share this on WhatsApp
Related Topics:25-year-old manAK-47arrestsNDLEAondopump action gun
Up Next