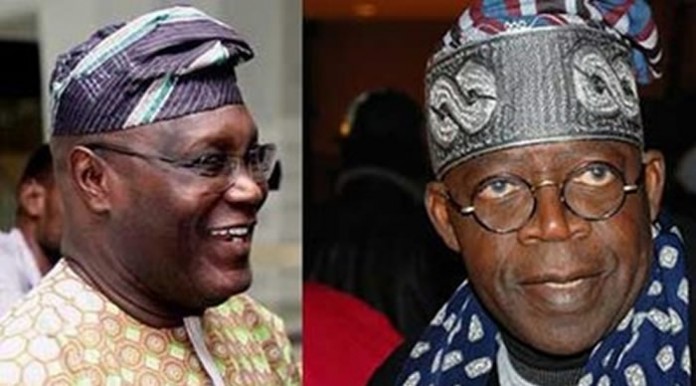 In the raging verbal war between associates of APC leader Bola Tinubu and those of his party man and Labour Minister Chris Ngige, the heat is going up as the Ngige camp drew fresh blood from Tinubu.

Ngige’s former commissioner for information Charles Amilo said Tinubu used to undo ex-VP Atiku Abubakar’s wristwatch back then at As Rock—when Ngige and Tinubu were governors.

He was reacting to another ex-commissioner of Ngige who earlier diminished the labour minister by revealing how he begged for and got an armoured car from Tinubu in Lagos—way back.

According to Amilo, Delta former Gov James Ibori was in that habit of fawning on Atiku too—at Atiku’shome or the Villa.

He, howver, added it wasn’t that Ibori and Tinubu could not afford the wristwatch. But it was a sigh of friendship and affection.

Amilo also disputed the earlier claim that Ngige cadged for a car from Tinubu.

“On the issue of car, I can remember that French President gave Asiwaju three old 2000 model 280s bullet proof. On a visit to Ngige at Abuja, Asiwaju dropped one for Ngige at his Abuja Governor’s Lodge for use when in Abuja in 2005 and kept one in Abuja, one in Lagos.

“Dr Ngige used it for five months before he brought it back to Tinubu to give to Olusegun Mimiko who just resigned from the Federal Executive Council ,(FEC) to join them in the anti-Obasanjo third term struggle and had to run against PDP as the Labour Party governorship candidate in Ondo State,” he said.

He advised those peddling the story should go and rest because Dr Ngige is not a car freak neither is he competing with anybody for who is richer.

According to him, Ngige before joining politics was already very wealthy both from medical practice, his motor company and vast quiet real estate business.

Reps member James Faleke and Ngige had a brickbat during the house hearing of the corruption allegation in Ngige ministry’s Nigeria Social Insurance Trust Fund (NSITF) during the week.

Ngige taunted Faleke who asked a question as Tinubu’s boy, and a Mushin boy. The minister insisted he honorable should respect him as Tinubu’s equal.