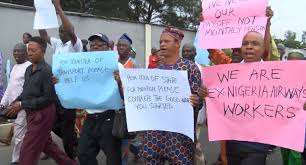 The publicity secretary of Nigerian Union of Pensioners (NUP), Nigeria Airways branch, Tom Ojuderi has urged the Federal Government to cut short the given time by the Minister of Finance in completing the remaining half of the total N45.5bn pension debt owed workers of defunct Nigeria Airways.

The Federal Executive Council (FEC) had in September 2017 okayed the sum of N45 billion for the payment of about 5909 workers’ entitlement. The defunct airline was liquidated by the Olusegun Obasanjo’s administration in 2004 over maladministration, huge debt and inefficient services.

National Daily gathered that the late President Umaru Yar’Adua’s administration gave a five-year pension pay to some of the workers in 2008, but several others have not received any benefit since 2004.

However, following the completion of about two weeks of verification and reconciliation, the office of the Accountant General started issuing the payment on Monday.

Ojuderi said making the payments come full circle by paying the balance of N22.68 per cent much earlier than six months the minister had promised would gladden their hearts and further avail them the opportunity to make good use of the paid arrears.

On the level of payment confirmation by his members, Ojuderi confirmed that some of their members in places like Minna, Kano and Lagos had confirmed receiving the payment, saying “It is really a joyous moment for those that have received alert and we are hopeful that it will soon go round.

“We have to thank the president for keeping his promise with the payment of this 50 per cent. And also thank the Minister of Finance for facilitating and making the payments possible. We hold them in very high esteem and counting on them to ensure the full payment,” Ojuderi said.

National Daily  recalls that the federal government through the Minister of Finance, Mrs. Zainab Ahmed had few weeks ago, announced the release of half payment of the total amount owed former workers and that the remaining tranche will come up six months after.

Already, no fewer than 2000 ex-workers of the defunct Nigeria Airways Limited have, as at weekend, received confirmation of Federal Government’s payment of their salary arrears covering about five years and 30 per cent pay rise.

The beneficiaries were members of the first and second batch of the payment schedule following the conclusion of verification and reconciliation exercises in Lagos, Enugu and Kano at the weekend.

It was gathered that the third batch of another 1000 ex-workers was Friday cleared and due to start receiving alerts of payment from their various banks this week.