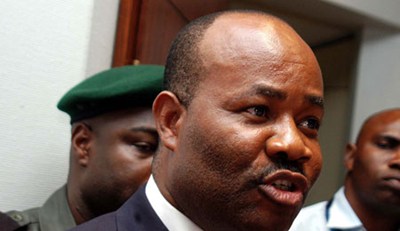 Former Governor of Akwa Ibom State and Minority Leader of Nigerian Senate, Senator Godswill Akpabio was excited with the performance of Super Eagles of Nigeria in their 2-0 victory over Iceland on Friday, even as he revealed what happened to him in Volgograd arena, where Nigeria recorded their first Group D victory at ongoing Russia 2018 World Cup,National Daily learnt.

Gongnews.net caught up with the distinguished senator of the Federal Republic of Nigeria at Volgograd international airport as he was leaving for another city in Russia, Moscow.

“I feel very excited witnessing the first victory of super eagles in Russia, although the first half was flooded with errors but coming back from the first half recess, I saw a new Super Eagles who were more purposeful to make Nigeria proud as good ambassadors” says Akpabio.

He continue, “and of cause out of excitement, I actually fell on the floor and I had to be supported back to my feet immediately I knew the two goals from Ahmed musa were  enough for us to keep our hope alive in the quest to qualify for the next stage of this prestigious tourney”  Akpabio Articulated.

Goodwill Akpabio who is the senate minority leader further described super eagles as Spartans due to massive support gathered by Iceland fans, at Volgograd arena.

“It feels so worth but sadden in the stadium as we were playing against over 47,000 people and not 11 players from Iceland, but the entirety of Iceland as a country is very small and that somehow prompted their moves into Volgograd arena to show uncommon supports for their players as the country is not far from Russia.

“Despite that Super Eagles’ commitment level was on the high side for Iceland to truncate because I believed one goal would keep the Iceland fans quiet even as eagles extended it to two goals, and Africa was obviously elevated so also the  spirit of Nigerians risen with great performance of our darling team Super eagles, as i even lost my voice due to the uncommon victory” Akpabio disclosed

Earlier before the match against Iceland Senate president Bukola Saraki, Senator Goodwill Akpabio and some selected Distinguished Senators from Nigeria, who were invited by Russia Parliament / Council of Russian federation, on a parliamentary mission ( inter parliamentary visit) used the opportunity to visit the Super Eagles’ camp in Volgograd to give them moral supports as patriotic Citizens even as they joined other spectators to witnessed eagles victory over Iceland.

Share this on WhatsApp
Related Topics:akpabiomusaWorld Cup
Up Next