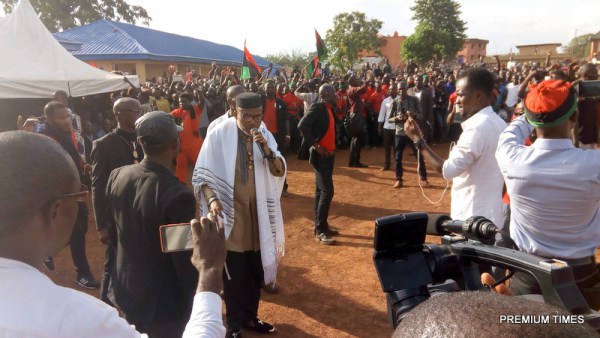 The Defence Headquarters have declared the Indigenous People of Biafra (IPOB) a “terrorist organisation.”

The military made the declaration in a statement on Friday by the Director of Defence Information, John Enenche.

Clashes between soldiers on a military operation and IPOB members in Abia State have left several people wounded. Although there have been reports of deaths, particularly, of IPOB members, none has been confirmed.

IPOB and its leader, Nnamdi Kanu are campaigning for an independent country of Biafra made up of ethnic Igbos. Although they had said their campaign was non-violent, Kanu said this week that that stance would be reviewed, accusing the military of attacking unharmed members of his organisation.

These include “The formation of a Biafra Secret Service, claimed formation of Biafra National Guard, unauthorised blocking of public access roads; extortion of money from innocent civilians at illegal road blocks, and militant possession and use of weapons (stones, molotov cocktails, machetes and broken bottles among others) on a military patrol on 10 September 2017.”

Public awareness on the State of Independent People of Biafra

1. The Independent People of Biafra (IPOB) group which has posed to be a security challenge in the Country, has been metamorphosing from one stage to the other. After due professional analysis and recent developments, it has become expedient, to notify the general public that; the claim by IPOB actors that the organization is non-violent is not true. Hence, the need to bring to public awareness the true and current state of IPOB. In this regard, some of their actions, clandestinely and actively, that has been terrorising the general public among others include;

a. The formation of a Biafra Secret Service.

e. Militant possession and use of weapons (stones, molotov cocktails, machetes and broken bottles among others) on a military patrol on 10 September 2017. 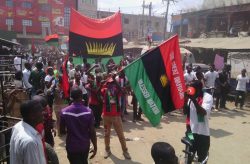 f. Physical confrontation of troops by Nnamdi Kanu and other IPOB actors at a check point on 11 September 2017 and also attempts to snatch their rifles.

g. Attack by IPOB members, on a military check point on 12 September 2017, at Isialangwa, where one IPOB actor attempted to snatch a female soldier’s rifle.

3. From the foregoing, the Armed Forces of Nigeria wishes to confirm to the general public that IPOB from all intent, plan and purpose as analysed, is a militant terrorist organisation. Therefore, parents and particularly unsuspecting residents of the South East and other Nigerians should advice their wards to desist from joining the group.

4. The Defence Headquarters restates its commitment to handling all the security challenges in the Country and further assures all Nigerians of the protection of lives and property.

Biafra: Nnamdi Kanu petitions UN, US, others over Army invasion of Igboland