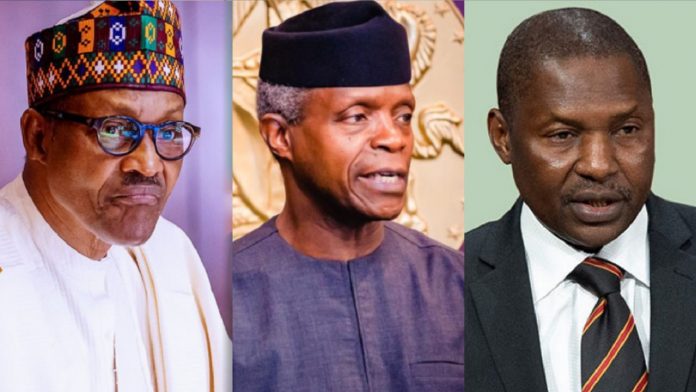 Mischief, a major preoccupation of the human mind, has been perfected by the word ‘government’ and governance in this country especially by the present administration led by General Mohammadu Buhari which without doubt has elevated the act to an unprecedented level that could best be described as satanic.

Whether the government wants to hear this or, distracting Nigerians from the glaring demonic looting of our resources will only deceive some but not all of us.

The first scene in Act One had it that the National Union of Petroleum and Natural Gas Workers Union of Nigeria (NUPENG), Tanker Drivers Branch went out to protest the deplorable state of Nigerian roads at no other place but NNPC office rather than office of the Minister of Works or even FERMA.

This was followed by second Act with another scene where following the tanker drivers’ protest; the Federal Executive Council (FEC) grants the Nigerian National Petroleum Corporation (NNPC) the approval to deploy some of its tax liabilities to 21 road projects across the six-geo-political zones at an estimated cost of over N621.2 billion.

What does this Administration think Nigerians are- brain-dead fools who cannot decode mischievous acts of this government or what?

Whether they want to hear this or not, we know that the entire plot was hatched on one table in one office and inside the Presidency.

The tanker drivers branch of NUPENG was ‘motivated’ to take their protest against government’s neglect of Nigerian roads to NNPC office to prepare the ground for the public disclosure of a finished plan to steal N621.2 billion under the guise of deploying the resources to fix some select roads across the six geo-political zones.

It is glaring that the Diezani’s angle was a propaganda stunt to divert the attention of Nigerians from the proposed heinous pillaging by the Presidency and whatever is left of the NNPC against the nation.

Now let’s look at it: As said, “The fund which will cover 21 roads spread across the country was a strategic intervention under the Federal Government Road Infrastructure and Refreshment Tax Credit Scheme.

As said, the NNPC tax deployment would not be a one-off payment but periodic and, the roads would cover a total distance of 1,804.6 kilometres.

There was an Executive Order 7, signed by President Muhammadu Buhari, allegedly allowing private sector operators to identify infrastructure such as roads for which they would deploy in advance of the taxes that they should have paid.

Is it not clear that a fraudulent scheme is unfolding before our very eyes?

It is noteworthy that the length of the roads to be fixed by the NNPC were dubiously exaggerated, some even up by 100 percent. The hailers will run their mouths to defend this. Now a clear case is the Aba (Ogbor Hill) to Ikot Ekpene segment which is 35 kilometres in real life but the NNPC budgeted it as 77 km. If you doubt ask even Google. This is just one o. You see our Nigeria!

Every law of the land is being broken. The due process Act is being abused and ignored. The Fiscal Responsibility Act is being flouted.

There’s nothing in the NNPC Act allowing this sort of cash grabbing Jamboree. Does NNPC have the powers to award road contracts on federal roads?

As said in a commentary, “Look at the sheer number of roads across the country that NNPC is supposed to fix, under which appropriation Act will the funds come from? Who will award this monstrous road contracts-Ministry of Works or NNPC?

Let’s even ask: which NNPC are talking about, the one the Group Managing Director and the Petroleum Minister told us a few weeks ago will stop existing in the next six month when the new structure of the unbundled firm will come into effect?

General Buhari is the Nigeria’s Minister of Petroleum Resources. So the President will award the road contracts to whoever and funds disbursed straight from the vaults without Appropriation abi?

Also read: Nigeria on the road to Kigali – ‘Rwanda 1994 Genocide’

NNPC which in the last six years of this administration has not been able to bring back its three and half existing refineries to run even at 1 percent installed capacity not to talk of building a single new plant not even a modular plant, is the same organisation that is stepping forward to build roads at a whopping cost of N621.2 billion. How did we get to this point as a country of people?

This same NNPC had severally in the past months failed to remit a single kobo to the Federation Account due to what it tagged “value shortfall” in another of its scam- the subsidy scheme. Now it’s coming up to dole out N621.2 billions to patch roads across the country.

Anytime this Buhari Presidency runs out of ideas, it will come up with distractions. Diezani has been investigated since 2015 and up till today neither the Presidency nor the EFCC has come up with a tangible charge to support the allegation of looting of billions of dollars of Nigeria’s money by the former Petroleum Minister except confiscating her pants, braziers, tummy belts and some jewelleries and maybe some leftover sanitary pads.

Dieziani Allison-Madueke was an Executive Director of Shell petroleum Development Company of Nigeria, the first female to occupy such position in Nigeria. Her Salary was well over a hundred million per annum.

This is the Diezani the small minds in this administration is painting as a person who cannot afford three -square meals for herself and family nor buy decent pants and braziers for herself if not for the billions of dollars she stole as petroleum minister. Tuaaaaaa!

If truth be told, the Diezani’s second hand underwear story is a full distraction packaged by those who have decided to rob this country of over N621 billion under a very dubious proposal. They are just distracting Nigerians from this latest atrocity of the Buhari-led Administration.

Tragically, The National Assembly has completely lost its purpose and usefulness especially the senate of baboons that always endorses whatever is thrown at them by the Presidency, if not, we  would have been hoping that this new fraud will not sail through at both chambers. But a time of recompense is coming where every soul that sinneth will pay for their acts.

Where are all those who wanted to “Save Nigeria” when the country was actually not under any threat of bleeding to death? They should rise up now to save Nigeria from the ongoing onslaught by Mr integrity and his gang before matured thunders go fire all of them.