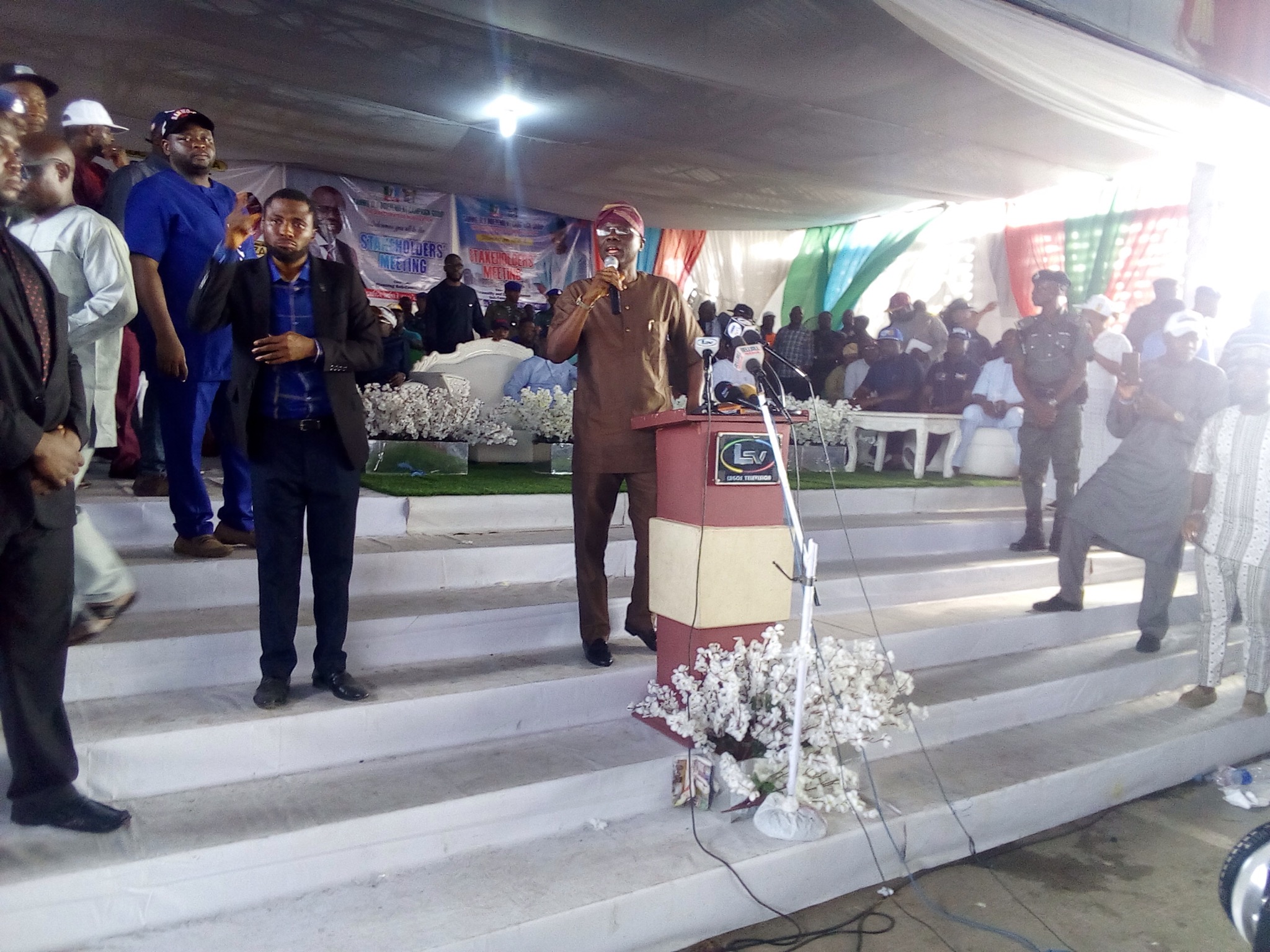 Nollywood artiste, artisan and other professional groups have endorse the All Progressives Congress candidate,Mr Babajide Sanwoolu at a stakeholders parley with them ahead of the commencement of the already scheduled campaign programmes.

Sanwoolu, who was earlier with Governor Akinwunmi Ambode at the Lagos State University for the inauguration of an ultra modern lecture theatre, donated by business man and philanthropist, Mr Remi Makanjuola, got back to the stakeholders meeting late due to gridlock.
Sanwoolu said that he had to showcase himself to the stakeholders who really matters in the political arrangement of the state, though not professional politicians, relating with 128 groups across the state means a lot to him as he promise to maintain the contacts further when the campaign eventually kick off.
“I apologize for my lateness, it was not insolence in anywise but an urgent need to attend to an equally important matter, this is a
familiarization parley, where we are to showcase ourselves that we are ready for service.
“I appreciate you all and also express my gratitude for the large turnout,we shall do the needful at the right time.
“All you gathered here from across the have huge electoral value to me that informs the need for this meeting it is however not a campaign set up yet .”Sanwoolu affirms.”

The Director of Mobilization Alhaji Abdullahi Enilolobo while delivering his welcome speech noted that, “94 percent of those gathered were not politicians but those that determines electoral fortune who identified with Sanwoolu.
“The artisans,students,professionals,civil societies,religious bodies, traditional groups the total membership of which runs beyond 2million are here signalling their readiness to vote Sanwoolu come 2019.

“Five people are chosen from each to ensure representation and the this will help our political fortune in the Independent Campaign Group.
Enilolobo,Dr. Obafemi Hamzat the Deputy Governorship candidate and the Deputy Director General Cardinal James Odumbaku along with the Governorship candidate Mr Sanwoolu all witnessed the administration of the oath of office as well as presentation of appointment letters to 57 local government areas and local council development area coordinators and secretaries of the ICG by legal officers which also trickles down to the wards for effective delivery.

The Director General of the ICG Mr Tayo Ayinde his keynote address, charge the newly appointed officers at the grassroots level to come to terms with the task ahead.
“All of you are well grounded in your localities and wards you must however know that the responsibility you are saddled with is not a child’s play.
“You must ensure that the overwhelming victory we are yearning for is our’s at the end of the day “.
The Baba Oja Alhaji Tajudeen Adeniyi in his goodwill message noted that APC has churned out good individuals in the governance of the state right from 1999 and so the market men and women shall always give their support.

“We shall deliver 5million votes to APC in the 2019, for the quality governance witnessed thus far in Lagos”.

Otunba Femi Oke chairman of the All Farmers Association who also displayed most of the products at the venue of the parley, also endorsed Sanwoolu promising out right delivery of 4776votes of their over 5000 members across the state.

Chief Jimoh Aliu the President General of the Association of Nigerian Theatre Practitioner ANTP, who led all other artiste at epoch making event also indicated the poise of the group to give their all for the success of Sanwoolu.

Share this on WhatsApp
Related Topics:Mr. Babajide Sanwo-Olu
Up Next

How police beat women to stupor, bribes them to keep mouth shut