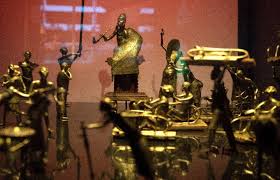 Share this on WhatsApp
Spread the love
France has agreed to return 26 works of art claimed by the West African nation of Benin. It comes more than two years after the former French colony unsuccessfully requested that items be returned.

It comes after Benin’s minister of foreign affairs, Aurélien Agbénonci, demanded in August 2016 that several objects belonging to the country be returned. France refused the request at that time.

The decision also follows a report which was due to be submitted to French President Emmanuel Macron on Friday. That report, seen by French newspapers Le Monde and Liberation, recommends changes to French law to allow cultural artifacts seized from former colonies to be returned to their home countries. It was drawn up by Senegalese economist Felwine Sarr and French art historian Benedicte Savoy.

Paris’ decision to return the works of art is a being seen as a victory for African countries which have been fighting to recover works taken by Western explorers and colonizers between the years of 1885 and 1960.

However, the 26 works of art are just a drop in the bucket, considering some 90 percent of Africa’s cultural heritage is believed to be in European museums. The Quai Branly Museum in Paris alone is home to some 70,000 African objects, according to Savoy. London’s British Museum holds around the same amount.

Earlier this year, Macron became the first Western leader to order a comprehensive review of colonial looting. In 2017, he told Burkinabe students that “African heritage can’t just be in European private collections and museums.”

Many Western Museums, however, have typically resisted calls to return objects to their home countries, arguing they lack the necessary resources to care for the works. And when the offer is made to lend objects to nations, some of them – including Ethiopia – have rejected the offer, saying they shouldn’t have to borrow their own stolen property.

Benin, a small country in Africa with a population of 11 million, has requested that roughly 5,000 artifacts currently in France be returned.

Share this on WhatsApp
Related Topics:Art WorkBenin Kingdom
Up Next