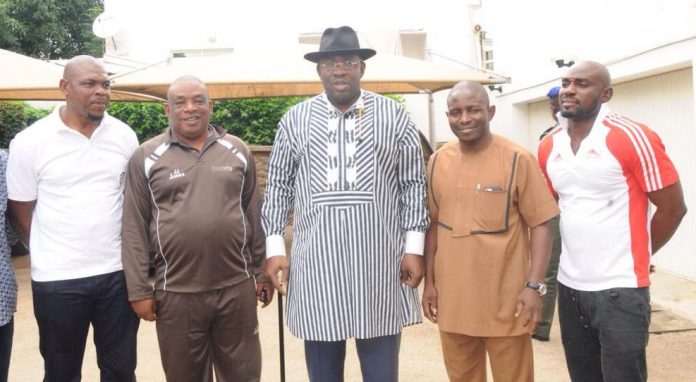 The Nigeria Wrestling Federation (NWF) has expressed deep gratitude and appreciation to the Executive Governor of Bayelsa State, Henry Seriake Dickson for sponsoring the recently-concluded 3rd Gov. Dickson National Wrestling Classics which took place in Yenagoa, National Daily learnt.
The NWF also praised the efforts of the medical team, the referees and other adhoc officials who contributed immensely to the successful staging of the Classics.
The tournament, which served as qualifiers for the 12th African Games in Morocco next month, came to an end on Tuesday with hosts; Bayelsa emerging overall winners ahead of Delta and Ondo States who finished 2nd and 3rd respectively.
Speaking on behalf of the federation, NWF president Daniel Igali thanked Governor Dickson for his continued support of wrestling in Nigeria, which has helped the country win lots of laurels in both continental and global championships.
ALSO READ:Nigeria Set To Miss 2019 African Wrestling Championships
The Nigeria Wrestling Federation, I want to commend the efforts of Governor Dickson; particularly for the sponsorship of the 3rd Gov. Dickson National Wrestling Classics which also doubled as qualifiers for the African Games in Morocco,” Igali said.
“Governor Dickson is a staunch and avid supporter of the Nigeria Wrestling team. He has shown this by his penchant for sponsoring the team to several continental and often times, even World Championships.
“After the last Commonwealth Games in Gold Coast (Australia), Governor Dickson hosted the team and gave them financial rewards which was unprecedented in the history of Nigeria.
“Let me also specially thank the medical team for rendering effective service and quick response to situations that needed their attention during the tournament.”