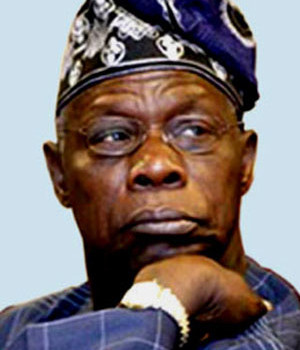 Former President, Aremu Olusegun Obasanjo has challenged African leaders to confront the lingering high rate of unemployment among youths or face future wrath from aggrieved and unemployed youths in the continent.

He dropped this timely warning at Abeokuta, Ogun State capital, where he played host to the new president of ECOWAS commission, Marcel Alain De Souza, who led a four-man delegation to parley with him.

Chief Olusegun Obasanjo, who is currently a special envoy of ECOWAS to Guinea-Bissau, made it plain that the expectations from the sub-regional body when it was established 41 years ago were yet to be met and this portends bad omen to the sub-region.

“A situation where more than 50% of our youths are unemployed is extremely dangerous. We now have a situation in part of West Africa where people now are dying of starvation. “Is it that we are not producing enough food or if we are producing what we produced evenly, whatever it is, it is shameful, it has led us to be begging international community for supply of food to any part of West Africa, it is not right‎?”

He said: “So the attention that we should have paid to the original objectives which is economic integration, economic development, socio economic, economic progress have been diverted. “Of course peace and security is the foundation of any socio-economic development and growth. Of necessity we have to pay attention to base on security. “My involvement in Guinea-Bissau was an enduring involvement. “I have been in that development when I was in government as President of Nigeria and Nigeria and ECOWAS appointing me as special envoy that kept my involvement and my interest.

It will be recalled that on Tuesday, June 21 Obasanjo raised a critical objection and said that the nation’s 774 local government creation had been rendered impotent and almost bastardised by systematic encroachment by their various governors.

He wondered if the glaring injustices and overbearing influence of the governors which they hand down routinely to the LGAs could be tolerated if the Federal Government elect to treat them the same way.