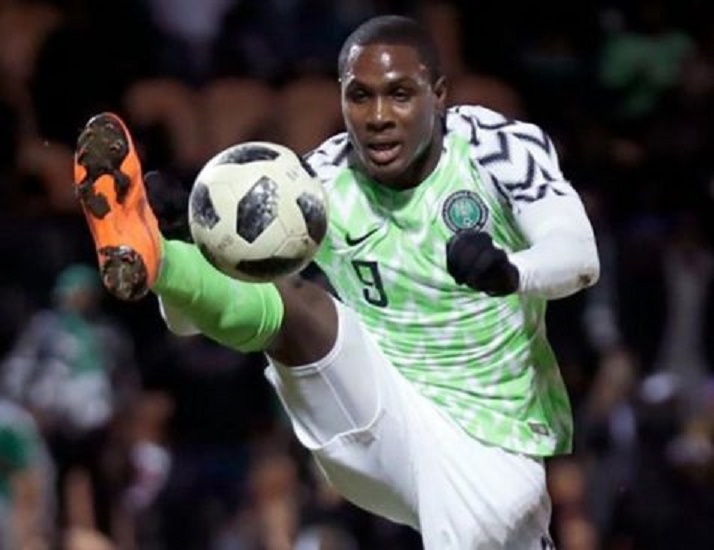 Former Manchester United striker, Odion Ighalo has revealed how his mum, pastor and Gernot Rohr influenced his return to the Super Eagles, denying claims he bribed his way back into the team.

Ighalo made his return to the Eagles in Tuesday’s 1-1 draw against Cape Verde in the 2022 World Cup qualifier.

His last appearance was at the 2019 AFCON where he emerged top scorer as the Super Eagles finish third.

Speaking on his return to the Eagles Ighalo, in an interview on NFF TV, he responded to allegations of him paying his way back and Osimhen as his worthy successor.

Read his comments below…

“I’ve been watching the team from afar they’ve been doing well. I’m happy to be back, I’m happy to see the boys again, I’m happy to give them my support whenever the coach need me I’m here and I’m back fully.

“Since the day they announced my retirement. I’ve had so many things in the internet and me I don’t pay attention to whatever negative vibes people say on social media, I’m not that kind of guy that make problem.

“Since 2019 when I retire, the coach had been in communication with me to come back. I told him I don’t think I want to come back but the pressure was too much. Even before I came now the pressure was too much that I had to tell my agent to speak to the NFF president and the coach because when I signed for my club in Saudi Arabia I told them I’m not playing for the national team anymore and to get me released for this match was difficult.

“So, most importantly I’m happy to be back to give my support, the coach spoke to me at length. I heard so many people like a guy in the UK who said I paid my way to the national team, I was just laughing. I have never, even when I was not in this position that I am, in my life and in my career I’ve never paid my way into the national team.

“The guy tried to defame my character but I’m not the kind of guy that makes problem if not he would have heard from my lawyer. Everybody have their opinion about me I don’t care but not to the extent about bribing which is very bad. I’m not going to go into that, the most important thing is that I’m here to support and I’m really happy to be back.

“I spoke to the coach that I’m coming back here to support the team, not to destabilise the team. They have a young squad that is doing well. There were talks that I’m back to take position I’m not going to drag position with nobody not Osimhen.

“Before I left the national team I personally called Osimhen and told him ‘this number nine position is for you, if you work hard you will rule Nigeria for long’, and I’m happy seeing him doing well. I’m here to support him, before I came I told the coach Osimhen is the number one striker, I just want to come and support and I try to do that. It was even said that I tried to fight for the number nine jersey, I was just laughing. So many things have been said.

“Before I came, I don’t want to mention the person’s name, top NFF official said something about a jersey and all that and I said no the number nine jersey Osimhen is the one that is using it and that I’m going to play with any jersey. But the official said Osimhen is a young player he will understand, I said no, this is the part of my condition to come back, I’m wouldn’t return if you don’t agree with this.

“He is going to keep the number nine jersey, I asked if the number 19 jersey is available they said it’s for Paul (Onuachu), I said no and asked for number 21 they said the jersey is not up to 21, I told them to give me any jersey available but number nine jersey no way will I put it on because when I retired I left it and Victor is using it and he is doing well we are not going to start talking about jersey

If it means playing without a jersey I will play, it’s not jersey that score the goals.

“Like I said, I’m not back to cause any problem. People that know me know I’m not a problematic person, I’m here to support and help the team to keep pushing forward. So we are not going to start disputing about a number, afferall it was someone that put it on before I took over I left and someone else is putting it on.”

“We are from the same Edo state and he is doing well and I’m really happy for him we do communicate,  anytime he scores I wish him well and pray and hope he continues to do well both in club and country. It is his time to shine and I pray nobody will take it from him.”

“Before I decided to return, first of all I prayed about it. I spoke to my mum because after the World Cup there was so many things that happened, threat and all that and I said I’m not going back.” He continued.

“And one of the reasons I came back is that coach Gernot Rohr was there for me even after the World Cup I was getting death threat and I said I was not going to play again for Nigeria. But he called me and said ‘even the best players in the world miss chances you don’t have to kill yourself because of this, forget about what they are saying, when you come and start scoring the same mouth they use to say bad about you is the same mouth they will use to say good things about you, come I believe in you’.

“Like I said I prayed about it, I talked to my mum, talked to my pastor about it and he asked if I want to go and I said of course, it’s my country it’s a privilege to play for Nigeria. Nobody is going to turn down an invitation to play for Nigeria but the circumstances back then. And my mum said to me ‘my son if you want to go I give you my blessing go God will protect you and guide you’. So I made the decision to come back and I’m happy I’m back.”

Share this on WhatsApp
Related Topics:bribesNFAODION IghaloSuper Eagles
Up Next