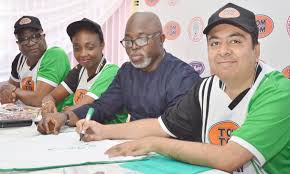 TomTom will play the role of ‘Official Candy of the Super Eagles,’ following a contract  agreement  for three year publicly presented by chieftains of the Nigeria Football Federation and Cadbury Nigeria PLC in Lagos recently, National Daily learnt.

The leading food beverage and confectioneries manufacturers have been on this route before, but Mike Itemuagbor, CEO of Pamodzi Sports Marketing which is the Sponsorship Agency, told National Daily  that “this is much bigger than what they were doing previously.”

President of the Nigeria Football Federation, Mr. Amaju Melvin Pinnick told the newspaper that the football body’s delight and excitement at regaining “a super brand” back into the fold, while pledging that the Federation would abide by every letter of the contract agreement.

“The Nigeria Football Federation is pleased to be publicly presenting this worthwhile agreement with Cadbury Nigeria Plc. We appreciate what Cadbury Nigeria Plc has done for Nigerian Football over the years and we rejoice that they are back with us.

“Candies are for champions. The Super Eagles remain a champion team and Cadbury Nigeria Plc is also a champion establishment. I strongly believe the company will enjoy the new experience even better than its previous romance with Nigerian Football.”

Managing Director of Cadbury Nigeria Plc, Amir Shami confirmed that the agreement would be for three years and that far more than the rights’ fee, the company would be spending a lot of money in activation.

NFF 2nd Vice President and Chairman of Marketing, Sponsorship and TV Rights Committee, Shehu Dikko, explained to National Daily that : “What we are doing today is amplifying the relationship. Cadbury had been there before, but now they are back and better. I can disclose that their investment is bigger than the rights’ fee they would be paying, and for us, it is about working together to promote and project Nigerian Football to much higher levels. TomTom will be official candy of the Super Eagles but they will also be around the other National Teams.”

Itemuagbor added: “As a Sponsorship Agency, we have the responsibility to ensure that both organizations derive fulfillment from the relationship, and we are fully committed to doing just that.”