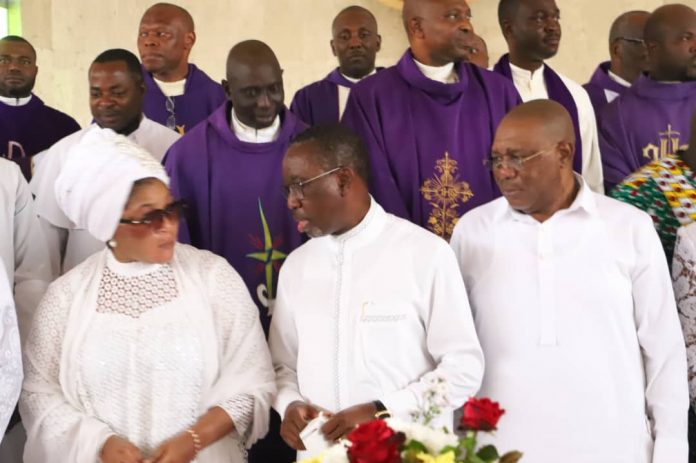 Governor Ifeanyi Okowa of Delta State at the funeral mass for late member of the State House of Assembly, Kenneth Ogba, at St. John the Baptist Catholic Church, Oleh, Isoko South Local Government Area, urged Nigerians to dedicate themselves to lives of service to God and humanity in order to impact positively on society.

Okowa at the ceremony in the company of the Deputy, Kingsley Otuaro; Speaker of the House of Assembly, Rt Hon. Sheriff Oborevwori; and his wife, Tobore; Deputy Speaker, Rt. Hon. Christopher Ochor; State Chairman, Peoples Democratic Party (PDP), Chief Kingsley Esiso; and other top government functionaries, noted that the late Ogba lived a life of great testimonies and impact.

The governor condoled with the deceased’s family, the state legislature and the Isoko people, encouraging the immediate family to keep looking up to God to renew their faith at this difficult time.

“On behalf of my family, the government and people of Delta, I again condole with the family of our late brother, Hon. Kenneth Edafe Ogba.

“Our brother for whom we are here today was a member of the State’s House of Assembly and he related very well with his colleagues and made great impacts in his immediate community.

“I didn’t know him too well before the election, but shortly after, I began to be very fond of him; unfortunately, the Lord took him, and we cannot question God.

“I urge you all to renew your faith in the Lord because no matter what we say as men, it is only God who can actually fill the gap,” Governor Okowa said.

The governor reminded the congregation that there was no good time to die, saying that only God knew why He allowed a man or woman to die at whatever age they did.

He expressed belief that the deceased played his role in life and God called him at this time for a reason.

The governor disclosed that few months to the deceased’s demise, they had a close session which got them quite close before death struck.

According to him, the late Ogba impacted so much on his immediate community, and the age we live up to does not matter but the impact made while we lived.

“He has been a philanthropist all through his life; he was full of life and loved his people.

“Looking through the number of persons that are here to mourn him, it is obvious that he made great impact on the society.

“Even as we mourn, we need to continue to live our lives to contribute positively to the society just as Hon. Kenneth Ogba did.

“For the Isoko people, you have lost a good son and I condole with you, and it is my prayer that I don’t come back here again for burial ceremony.

“May you never lose your sons and daughters at a time that the grieving is much. May God help us as a people and as a state that we don’t mourn anymore.

“He may be gone physically but he lives on in the lives of the people he has impacted,” the governor stated.

Earlier, Very Rev’d Fr Christopher Ekabo, in his homily titled “Increase our faith in a time like this” said the life of a man was defined by birth and death.

He added that between birth and death there must be self-improvement and service to God and humanity.

“Kenneth Edafe Ogba lived a life of service to God and humanity.

“He was a good Catholic and a great family man and he will be remembered for the great works he did while he lived,” the cleric said.