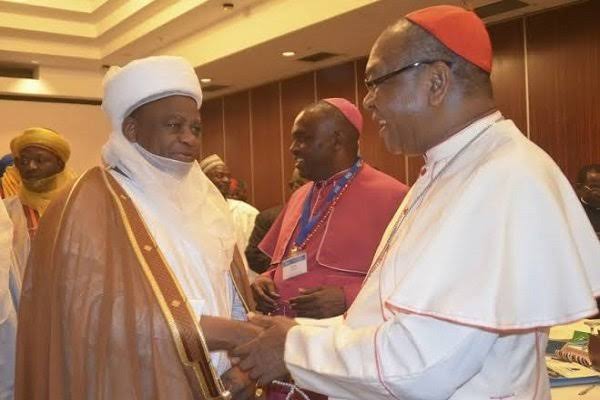 The Nigerian Inter-Faith Initiative for Peace (IIP), under its Tripartite Consultation (TC), has called for reconciliation, peace and national cohesion for a prosperous nation under God.

The group made the call during the TC joint consultation meeting on the “State of the Nation” on Wednesday in Abuja.

The convener of the meeting, Cardinal John Onaiyekan, said that as heavy clouds of impending tempest hung over the nation, people should not just sit and complain.

“Nigerians cannot just sit back, complaining or merely waiting for the worst to happen.

“Many are thinking aloud, speaking out clearly, discussing and dialoguing to seek a way out of our impasse quickly.

“This tripartite consultation is one of such many voluntary fora for positive conversations on the state of the nation.

“We must find our way back as a country from the brink of chaos and look forward to reconciliation, peace and national cohesion, for a prosperous nation under God,’’ he said.

Onaiyekan said that the state of the nation called for major concern as the challenges facing the country were many, serious and well known to all.

According to him, Nigerians are talking, often complaining and at times even threatening to quit a dysfunctional state in which they have lost all trust and faith.

He said that in the midst of the voices, the government should come out with a clear position and explanation why certain things that ought not to happen were happening in a modern and civilised state.

The clergyman also said that the National Assembly, which is the institutional forum for fruitful dialogue and conversation, should try to measure up to expectation.

Onaiyekan, however, prayed that the Almighty and Merciful God save and prosper the nation.

“NPC has done so much in building peace and solving crises in state elections.

“It will go further in building national peace and reconciliation,’’ the Sultan said.

Former Head of State, retired Gen. Abubakar Abdulsalami, who led the NPC, said that the tripartite consultation meeting was timely.

Abdulsalami added that a series of meetings have been held over time regarding restoration of peace and unity in the country.

He urged the group not to remain silent over the issues bedeviling the nation but to lend their voices for Nigeria and for Nigerians.

“Hopefully, we will find a way out of the mess we have put ourselves in this country,’’ he said.

Also, Dr Usman Bugaje, a member of the Working Group on Peace Building and Governance, said that Nigeria has witnessed more of a moral crisis and decay than any other crisis.

“Nigerians are looking up to its moral leaders to help.

“It is actually time for those with moral credence to come forward and help,’’ he said.