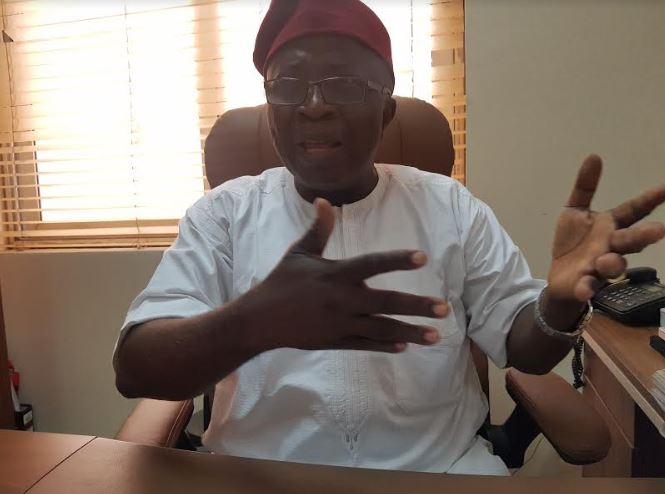 Share this on WhatsApp
Spread the love
By Olanrewaju Adesanya
Hon. Setonji David,representing Badagry I constituency at the Lagos State House of Assembly has situated the real reason for establishing Operation Amotekun squad by the southwest states, citing abnormalities in the constitution as root cause.
He counseled that until something drastic is done about the constitution,Nigeria will remain in a bewildered state as it pertains security.
Setonji said,”I cannot talk about the efficiency now until it starts being functional but the idea- Operation Amotekun concept is a fantastic one.
” I love the idea because policing is a local thing,security is also a local thing,if you want to police an environment it has to be done by the locals, what we have in Nigeria is an aberration,a policeman from Bayelsa state would come and be working in Lagos state.
“We have always been clamouring for state police because the constitution we are operating in this country is an abnormal one,the 1999 constitution is not in our interest and can never give us peace in this country.
“We don’t have federating units,it is running like a unitary government,the constitution states that a Governor is the chief security officer of a state,whereas the Commissioner of Police is operating from Abuja,to come and do what? So it is not right so this idea (Operation Amotekun)is fantastic and I support it whole heartedly.
Speaking on what form the recruitment of personnel for  the squad should take,the lawmaker opined that the knowledge of the area and cultural features goes a long way to ensure proper security.
“Policing or security is a local thing that is people in Badagry,my constituency they know themselves,so when you get security personnel among them, they would be able to know what is going there.
“They can speak the language,they know all the streets, so it is easier for them to police themselves, than for you to send somebody from outside to go and police them.
“I will advise that they put people in the  locals. The problem of using police for political gains, who says the federal government cannot use it for political interest ? Those at the federal are they angels?
“So the same thing applicable to state police is also applicable to federal police. Though things are getting better now,some years ago there are situations where the federal government use the police against the states they are not controlling.
“So that is not an excuse for us not to do what is right,what is right is that they should employ people from the locality they are going to monitor that is what is best for this  country.”
Setonji emphasized that the Amotekun squad is the way forward.
“It is the solution, because we don’t have enough police in the first place,what is the ratio of our population to the police?
” It is abnormal,so we want more policemen and when they employ more policemen from the local level,they know the nooks and crannies of their area so they can monitor properly,if there is any untoward activity anywhere they would be able to know.
” It is only better that way,so that if you have Fulani group or any form of group whatsoever doing something contrary to the interest of the people in the locality,they will identify those people and bring them to book.
“Policing is about information, it is about giving information to whoever is in charge, so the best thing is for them to allow the local people from the community they are monitoring.
“In other climes they have different kinds of police; they have state police,local government police, federal police and all other forms doing the same thing,only that everybody has its own jurisdiction and the work is done.” Setonji said.
Reacting to the report that some youths from the northern extraction argued against the Amotekun squad creation,Setonji states that their take is ill informed and clearly misguided.
“That is their problem,anybody can have his own opinion, they are the problem of this country, those play guided youths,we are talking of state policing,somebody from Sokoto state cannot come and police Lagos likewise somebody from Lagos state cannot come and police Sokoto effectively, it is not a tribal thing, we are talking policing not military.
“There are so much insecurity everywhere,so if somebody want to properly police my local government, such should employ people from the local government because they know the nooks and corners of that local government and they can effectively monitor the security challenges, but if you bring somebody from anywhere who doesn’t know the area,neither speaks the language there will be no result.
“You need special attention,that is why there is no cooperation between the people and the police. It is very rare nowadays for people to go give information to police and police thrive on information.
“Can you go and give Nigerian Police information? You will be afraid it can leak out.
“The real problem of this country is the constitution and until it is addressed, we will remain like this forever.
“It is abnormal, we are practicing unitary government,each states will have to develop itself not a situation,where each goes cap-in-hand at the end of every month to Abuja to go and collect money.
“Take for instance Lagos,we make so much money from VAT but all taken by Federal government while a paltry sum is given to Lagos and so many other things like that,so the system we are practicing is not a normal system and until we decide to do what is right,this country will remain like this forever.
“Some feigned to be enjoying it but they are not because even in the north there would soon uprising because there are so many people who are educated but have no jobs and they are on the streets now,so instead of us to address those issues,we are still playing with the challenges, I pray we get out of it.
Share this on WhatsApp
Related Topics:operation “Amotekun”Southwest
Up Next