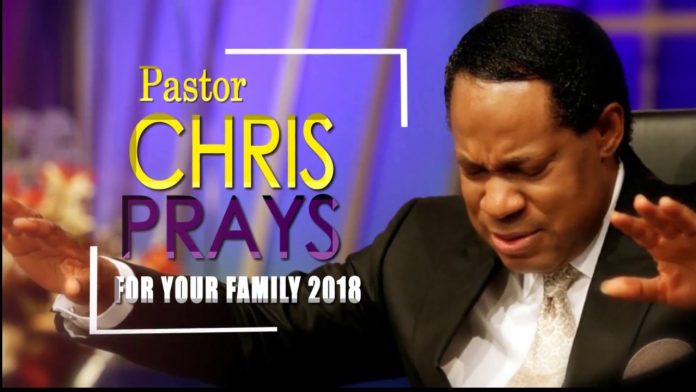 Millions of Christians around the world have begun the much talked about Global Prayer Week being led by the President Believers Loveworld aka Christ Embassy Rev Dr. Chris Oyakhilome.
The five-day Prayer which began from Monday February 19 to Friday 23, coupled with fasting is coming on the heels of an ongoing 21-day Prayer and Fasting already declared from February 1 to 21 by the Man of God for members of the Ministry in Nigeria for ‘Change in Nigeria’.
Already, millions of participants from over 150 nations of the world are connected to the Global Prayer Week through the Pastor Chris Global Prayer Network.

Speaking during his opening ministration, Pastor Chris said: “The Church of the Lord Jesus Christ is the most beautiful thing in the earth How the Lord loves us; To him we are priceless.”

According to him, “All of God’s wisdom is in Jesus. Jesus is God in flesh. Jesus is sitting on God’s Mighty Throne. Every time you pray in the Name of Jesus, understand there’s no greater Name. When you know who Jesus is, you’ll fall in love with Him. To know Him is to love Him.” Pastor Chris stated during a brief exhortation.

He added: “There are certain things that we must understand about prayer. Prayer should be a priority, there are things that will not happen unless you pray. God needs our invitation into our circumstances.”

During the February edition of the ministry’s Global Communion Service, Pastor Chris declared February the Month of Change. By extension of the Word of the month, a lot of changes are being effected in the realm of the spirit as we pray this month. Having effected these changes in spirit we are confident that there shall manifestation of the changes in the earth, he stated.

According to Pastor Chris, “We are not doing this because it is a good idea but we are doing it because God has instructed us to pray.”

In her opening remarks, Chief Executive Officer of the BLW Pastor Deola Philips said: “This week there is going to be so much power in the atmosphere and people will be receiving miracles.”

Quoting from Isaiah 1:18 while preparing his followers on the need to pray the right way, the cleric said: “When you need to pray about certain things that are not within your immediate control or personal territory, you’ll have to pray an argumentative prayer. It’s the kind of prayer where you present your case legally before God. We see this happen with Elijah as he prayed earnestly for it to rain after a three and half year drought. Elijah didn’t have absolute legal jurisdiction over the rain, so he had to pray argumentatively and plead his case with God.”

“When you study the account in 1 Kings 18:42-43, you’ll observe that after Elijah declared to King Ahab that it was going to rain, he went into intense, heartfelt, intercession, pleading his case with God,” he added.

The Man of God leads millions to pray every Monday, Wednesday and Friday by 12noon and 10pm local time for 15 minutes each time through the Pastor Chris Global Prayer Network as he regularly sends prayer posts via the Pastor Chris Live Super User account on Kingschat, a leading social networking application that is available on the Play Store and Apple Store. Also, many are participating in the two prayer sessions by downloading the LiveTV Mobile App to join the Live Transmissions at 11am to 2pm (GMT+1) and 5pm to 8pm (GMT+1)