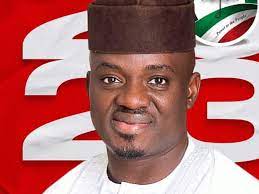 The governorship candidate of the Peoples Democratic Party (PDP) in Nasarawa State, David Ombugadu,  at a campaign rally in Obi Local Government Area on Sunday, promised that  he will give topmost priority to insecurity if elected.

Ombugadu decried that different communities in the state had come under attack at various times during which people were killed or kidnapped.

“Farmers in some communities can hardly go to their farms and people can no longer travel as they used to do.

“If I become the governor, we will collaborate with security agencies and deploy technology to address insecurity and ensure that the state is safe for all,’’ he said.

Ombugadu also said that if elected in 2023, he would liaise with the Federal Government to expedite action to begin exploration for crude oil in the state.

He called on the electorate to vote for all PDP candidates for good governance that would give priority to citizens’ welfare.

Also, at the rally, former Minister of Information and Director-General of the PDP Campaign Committee in Nasarawa State, Labaran Maku,  decried the rate of kidnapping and other crimes in the state.

He noted that four children of the PDP chairman in Doma Local Government Area of the state were kidnapped recently and are still in captivity.

He charged Governor Abdullahi Sule to use the monthly Security Vote to secure the people and the state.

Maku also called on the people to vote for all PDP candidates at the 2023 general elections as the party was prepared to tackle insecurity and improve the welfare of the citizenry.