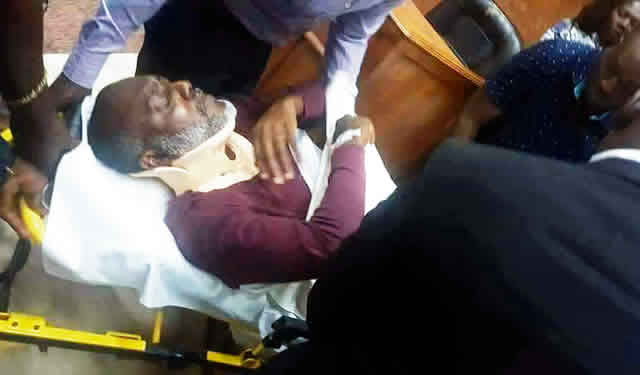 The PDP has described as “repulsive and inhuman” a tweet from one of President Muhammadu Buhari’s media aides describing the Monday trial of PDP’s former scribe Olisa Metuh as a drama.
Metuh, facing trial for alleged diversion of N400 million from the Office of the National Security Adviser under Sambo Dasuki, was all patched up and stretchered into the Federal High Court, Abuja, before Justice Okon Abang.
But one of Buhari social media handlers was sure Metuh was play-acting. Then Loretta Onoche tweeted on Tuesday.
“NOLLYWOOD drama Starring Olisa Metuh. Act 2 scene 1.[SPOT THE DIFFERENCE. PDP CONVENTION: Strong, hale & hearty and even throwing punches!”.
‘Days later …FRAUD TRIAL IN COURT: Weak, tired & bandaged to the neck on a stretcher & ambulance to complement the Nollywood drama.”
The opposition party in a statement on Wednesday by its spokesperson said Onoche’s tweet confirmed that the interest of the presidency in the trial was beyond seeking justice.
“It is repulsive that a Presidential aide has once again intruded directly, with malicious suggestions, in a matter that is on judicial trial, thus further exposing that Chief Metuh’s travails in the course of the trial, may have been politically hatched and orchestrated,” said Kola Ologbodiyan.
According to him, Metuh, whose spinal chord ailment has badly deteriorated, was brought to court in his current medical state, sequel to the order of the trial judge.
“It is therefore irresponsible, wicked and an unpardonable act of inhumanity, for the presidency or any of its agents to mock Chief Metuh for obeying the order of court, even in his current state of health,” the party stated.
PV: 0