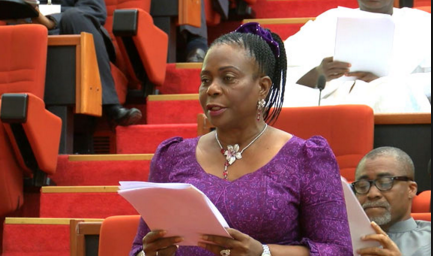 Some workers at the national assembly created a scene on Monday, after Biodun Olujimi, a PDP senator representing Ekiti south, allegedly asked her aide to assault a member of the Parliamentary Staff Association of Nigeria (PASAN).

The lawmaker was reportedly irked by the decision of the PASAN member to ride in an elevator with her.

The senator was on her way to the public hearing of the senate committee on petroleum downstream, investigating the N5 trillion subsidies allegedly paid to the Nigerian National Petroleum Commission (NNPC).

Olujimi was said to have ordered her aide to slap the official whose identity was not revealed.

The National Assembly staff immediately told members of PASAN who were holding a congress on the second floor of the new wing of the Senate.

This caused an outrage as his colleagues stormed out of the congress in a bid to attack the lawmaker, who was scuttled to safety by her security guards.

“From today, I will start entering lift with senators. No senator will ever push me out,” a national assembly staff said in anger.

It was also gathered that the parliamentary staff were holding the congress ahead of a strike.

Speaking with journalists after the incident, Olujimi vowed to take the matter up with the police.