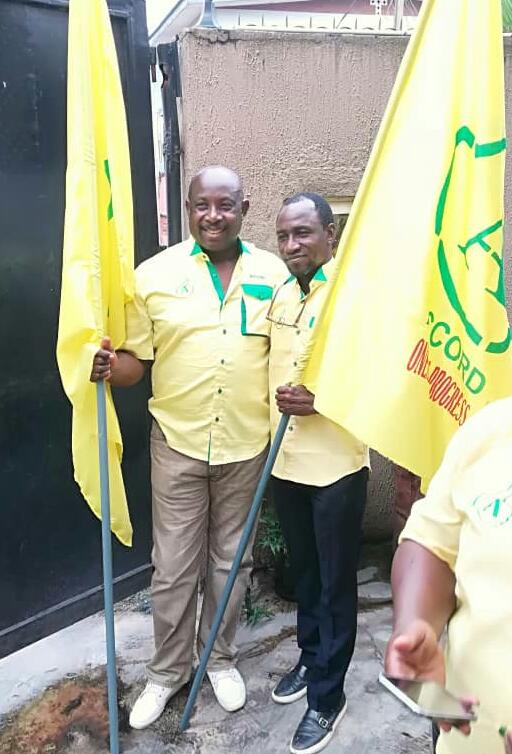 The All Progressives Congress (APC) stakeholders in Mushin local government have faulted former Legal Adviser of APC, Dr. Muiz Banire for encouraging anti-party moves to decimate the party.
In a disclaimer issued by a concerned group, Mushin Democracy Watch, APC members were cautioned,” to discountenance so called APC members attached to Accord Party, whose aim is to decimate the formidable Mushin polity for selfish interest.
According to them the individuals who engage in this anti-party
activities are; Mr Ayo Adeluola popularly known or called (lron Man) and Mr Monsuru popularly known or called (Say Monsor) and they are resolved to support APC presidential, governorship, senatorial candidates, but stand against the party’s house of representatives and state house of assembly candidates in Mushin, being candidates of Accord Party for the same positions, but many still perceived them as APC
members.
Our reliable source alleged that,” the individuals whose names were
afforded here are non APC members and also have nothing to do with APC from the National level to the local Government level as they were planted with an ulterior motive by Banire; feigning their poise to work for APC to cover their plot.
“All the APC stakeholders, members, and all the leaders in Mushin Local Government  from our distinguished, Senator Ganiu Solomon to all APC Party Chairmen in both Mushin local Government and Odi-Olowo Ojuwoye LCDA and all APC Candidates from President Muhammad Buhari,Hon.Babajide Sanwo-olu,Senator Solomon
Olamilekan(Yayi),Hon.’Bolaji Yusuf Ayinla(BYA),Hon.Adeyemi Taofeek
Alli,Hon.Olayiwola Olawale(Omititi)and Hon.Akisanya Nurain(Osmak),by this disclaimer dissociate self of any relationship with these Accord Party and Opposition party members.
The group however, alleged that the unfounded ties the affected
individuals seemingly had with the party was one of the mischievous
moves of Dr. Muiz Banire to covertly put banana peels on the paths of
the candidates ahead of 2019 general elections, claiming the APC in Mushin has a perfect model for crisis resolution which cannot be
decimated.
Having refused to respond to many calls placed through to Dr. Banire by our correspondent  to establish or fault the allegations, a text was sent and his response in verbatim is afforded below.
“My advice is that publish what you want at your risk of libel. Just you are dealing with a professional and not a politician”. Says Banire.
PV: 0