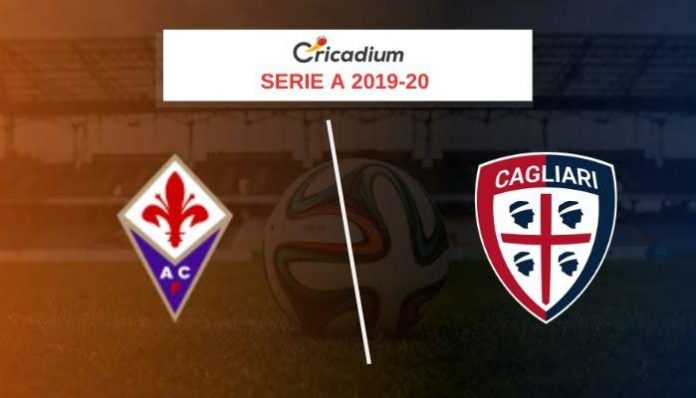 Share this on WhatsApp
Fiorentina will be looking to build on their vital win over Parma when they play host to Cagliari at the Stadio Artemio Franchi on Wednesday evening.
Cagliari currently sit five points above their midweek opponents in the table, but the visitors suffered a 1-0 defeat at the hands of Atalanta last time out.
Fiorentina managed to end a run of five games without a win as they overcame Parma 2-1 at the weekend – a result which leaves them nine clear of the relegation zone after 30 matches.
A first-half brace from Erick Pulgar was enough for Fiorentina to enjoy their first victory in the Italian top flight since February, with Giuseppe Iachini’s men having drawn three and lost two following their 5-1 thrashing of Sampdoria before the enforced shutdown.
La Viola now sit 13th in the table on 34 points and should not be in any real danger of being dragged into a relegation battle at this late stage, but there is no getting away from the fact that it has been a disappointing couple of seasons for Iachini’s men.
Fiorentina are well-positioned to improve on their 16th-placed standing last season, but for a side that were consistently challenging for the top four between 2012 and 2016, a mid-table finish is relatively mediocre by their standards.
La Viola will now be searching for only their second league win on home soil since the turn of the year, but Fiorentina cannot move any higher up the table with a win courtesy of Parma’s five-point lead over Iachini’s men.
Meanwhile, Cagliari’s three-game unbeaten run came to an abrupt end as they suffered a 1-0 defeat to Champions League hopefuls Atalanta at the weekend.
The tone for the game was set early on as Andrea Carboni conceded a penalty and was given his marching orders, with Luis Muriel dispatching the resulting spot-kick to condemn Cagliari to their 11th league defeat of the season.
Walter Zenga’s men had enjoyed a decent set of results since the restart with victories over SPAL and Torino following the resumption of the Italian top flight, and the 10 men of Cagliari certainly gave the free-scoring Atalanta a good run for their money despite Carboni’s red card just 26 minutes in.
Gli Isolani are firmly in mid-table obscurity with eight games remaining as they lie 11th in the table on 39 points, but the story of the season could have been completely different had Cagliari not endured a 12-game winless run before the victory over SPAL at the end of June.
The two clubs played out a 5-2 thriller in the reverse fixture, with Cagliari coming out on the correct end of the scoreline as Radja Nainggolan bagged one goal and three assists for Zenga’s men at the Sardegna Arena.
Dusan Vlahovic returns from a two-game suspension for Fiorentina and should start up top alongside Franck Ribery, and the highly-rated Federico Chiesa is also in line for a recall.
However, German Pezzella is suspended after the defender picked up his 10th booking of the season in the win over Parma, with Federico Ceccherini likely to slot into the back three.
Ever-present goalkeeper Bartlomiej Dragowski did not feature against Parma following reported muscular discomfort, but the 22-year-old should return to the starting lineup against Cagliari over Pietro Terracciano.
Following Carboni’s red card for Cagliari against Atalanta, former Liverpool defender Ragnar Klavan is likely to start in the heart of defence.
Leonardo Pavoletti, Christian Oliva and Gaston Pereiro remain on the treatment table for the visitors, but Zenga will welcome Luca Pellegrini back from suspension for the trip to Florence.
Prediction:  Fiorentina 1-1 Cagliari
Fiorentina’s confidence would have received a huge boost as they managed to end their winless streak against Parma, and Cagliari have not performed all that badly in recent weeks despite the recent defeat to Atalanta. That being said, we are struggling to separate the two sides and think that a draw is the most likely outcome.
Share this on WhatsApp