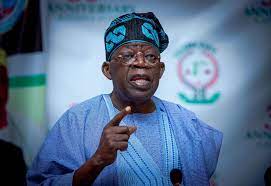 The presidential candidate of the All Progressives Congress (APC), Asiwaju Bola Tinubu, on Wednesday held inter-faith special prayer session in Abuja. The prayer programme was organised by one of his support groups mobilizing support for the presidential election, the Asiwaju Project Beyond 2023.

The prayer session held in Asokoro, Abuja, had in attendance some APC chieftains, who include Musliu Obanikoro, former Minister of State for Defence, Deputy Majority Leader of the Senate, Ajayi Boroffice, representing Ondo North Senatorial District in the National Assembly, among others.

Boroffice appealed to Nigerians to seek the face of God in selecting a passionate leader like Tinubu, who he said is the leader Nigeria needs.

The senator declared: “I have been with Asiwaju for a long time and I know that he is the person who can salvage the economy, provide the leadership we need now. So, I have no choice than to step down and support him.

“I established several platforms to market him. I established the ‘’Yoruba Koya” which is going around the country on his behalf.

‘’This election is going to be strategic and scientific that we have to do a lot in information analysis. Not only going round wearing T-shirts, no. So we are gathered here today to begin the campaign with God.

“We have started here today with God as according to INEC timetable, campaign is allowed beginning from today. We are praying for his guidance and grace to finish well too.’’

The Director-General of the Asiwaju Project Beyond 2023, Bar. Realwan Okpanachi, explained that the motive behind the special prayer programme was to drum support for Tinubu and to present him to God before in first week of the campaign.

‘’Asiwaju as a great leader and his running mate, Sen. Shettima deserve our best wishes through prayers and spiritual presentation to God Almighty their creator as the campaign begins today.

‘’That’s why we are gathered here to talk to God on behalf of these two great men who have touched lives of many citizens  positively in the past.

‘’This evening, we have with us prominent spiritual leaders from both Islam and Christianity to lead us in intercessory prayers for God’s protection and divine guide as we move into the campaign proper.

‘’We believe that God has answered our prayer both for the candidate, his running mate and for Nigeria as a whole,” the DG said.

The Muslim prayers were coordinated by Sheikh Danazumi Musa, National Deputy Chairman, Council of Ulama of Nigeria and Dr Abdul Mumeen Ashiribo, another prominent preacher from University of Ilorin.