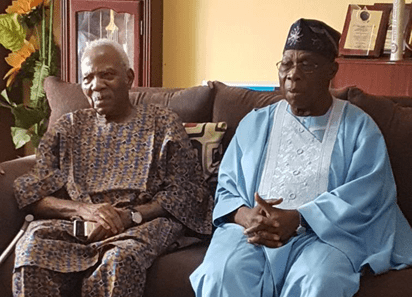 Former President Olusegun Obasanjo on Monday extended his anti-Buhari campaign to the leader of the Afenifere, Pa Reuben Fasoranti. Dr. Obasanjo had visited the country home of Fasoranti in Akure, Ondo State, after over 20 years of such meeting.

The meeting, was held behind closed doors for about 30 minutes, and deliberated on charting a new course for the Yoruba nation in the 2019 general elections, essentially, the presidential election.

Dr. Obasanjo, leading the Coalition for Nigeria Movement (CNM) in building a Third Force to the ruling All Progressives Congress (APC) and the Opposition Peoples Dmeocratic Party (PDP), aligned the CNM with the African Democratic Congress (ADC). He arrived the residence of Fasoranti at about 3.03pm on Monday, and was received by chieftains of his party, ADC.

Dr. Obasanjo, after the closed-door meeting, simply said; “I only come to greet my father.”

He declared:  “Can a son not come to see his father any time he wishes?

“Do I have to take permission from you before seeing my father? And how does that become your concern.”

However, Fasoranti, surrounded by Afenifere leaders who include Chief Seinde Arogbofa, the Secretary General of Afenifere; Chief Sola Ebiseni, Kole Omololu and Chief Femi Aliko, described the meeting as a `good reunion’.

He acknowledged that Obasanjo came to pay courtesy visit, saying he appreciated all his efforts about Nigeria, particularly the Yoruba nation.

“He has come now because he values my friendship,” he said.

Fasoranti refuted any discussion on the 2019 election.

The Afenifere leader, however, admitted that he supported the letters written to President Muhammad Buhari to protest the indiscriminate killings in Nigeria by herdsmen and sectional fight against corruption. He also noted that Buhari has failed and that many people in the country is aware of the failure.

The Afenifere leader declared that he is in support of any coalition that would create a mega party to dislodge APC in 2019.