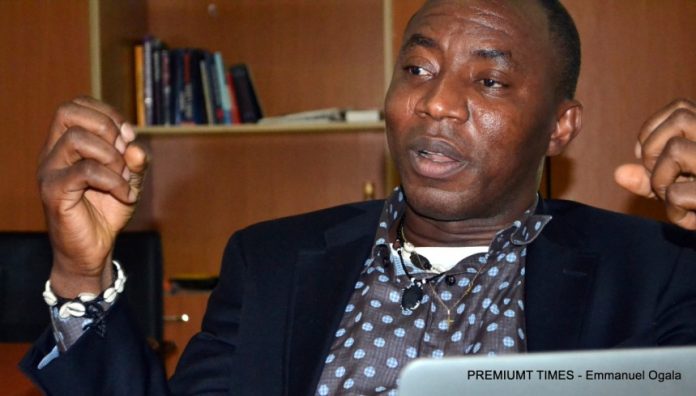 Justice Taiwo Taiwo of the Federal High Court, Abuja, after listening to the arguments of counsels to the Department of Security Service (DSS) as well as detained Omoyele Sowore, Convener of #RevolutionNow Movement, in his judgment, ordered immediate release of Sowore from DSS custody. He, however, directed Sowore to deposit his international passport to the registrar of the court before he is released to his counsel, Femi Falana SAN.

“I have listened to the submission of the learned counsel for the applicant/respondent. I am also not oblivious that there is an information filed in this court dated September 19, 2019 but filed on the September 23, 2019. I did not have the information before me but I take judicial notice of the filing of the information since I have before me one of the counter affidavit of the applicant deposed to by one Tanko Musa.

“I also note that the counsel before the court most especially the learned counsel for the applicant made reference to and confirmed the filing of the information.

“The court can make use of any document before it especially if that document forms part of the record of the court. The order of court has not been renewed and cannot be renewed in view of the motion ex-parte stated earlier.

“I have listened to the submissions of the learned counsel most especially for the respondent (Sowore) that he should be released from the custody of the applicant (DSS). It is a fact that there is no longer an extant order restraining the respondent as at today. It is not also in doubt that there is an information filed in the registry of this court. The merit of which this court cannot go into at this stage.

“I, therefore, order the respondent (Sowore) be released forthwith but he must deposit his international passport with the Chief Registrar of this court within 48 hours of this order.

“Furthermore, the respondent shall be released to Mr. Femi Falana (SAN) forthwith by the applicant that is State Security Service.