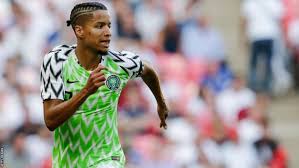 Super Eagles head coach, Gernot Rohr, has handed an invitation to Tyronne Ebuehi to replace Kenneth Omeruo who was missing in action on Sunday when his team lost to Levante due to an injury he sustained in the friendly match against Brazil

Omeruo had a remarkable 2019 AFCON tournament in Egypt, where he was part of the Super Eagles squad.

National Daily gathered that Ebuehi who currently plays for FC Benfica of Portugal, will have another opportunity to prove himself to coach Gernot Rohr as he has also had his own fair share challenges in the past season in the form of injuries.

The 23 year old player will have to put up an impressive play to hopefully get a call up again in the next two AFCON qualifier matches against Benin Republic and Lesotho.